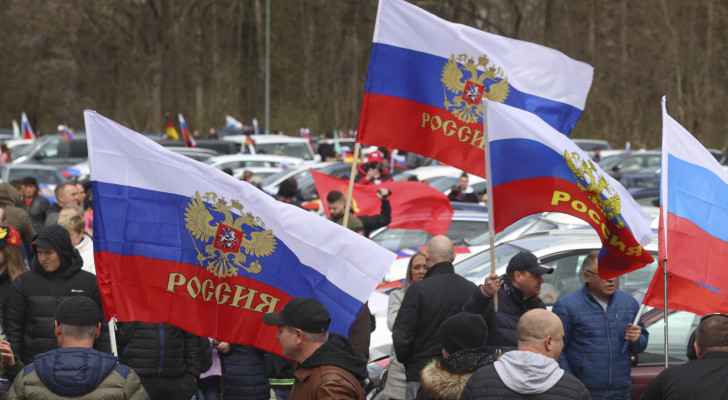 Pro-Russia protesters rallied in Germany on Sunday, with the country's significant Russian-speaking population demanding an end to the discrimination it says it has suffered since war began in Ukraine, AFP reported.

Germany is home to 1.2 million people of Russian origin and 325,000 from Ukraine. Authorities fear the conflict could be imported into Germany and the protests used to promote Moscow's war narrative.

Police have recorded 383 anti-Russian offenses and 181 anti-Ukrainian offenses since the Kremlin's military operation started on Feb. 24.

Around 600 people descended on financial hub Frankfurt on Sunday amid a sea of Russian flags to protest "against hatred and harassment,” an AFP journalist saw.

Police threw up a large cordon to separate the protesters -- marching behind a banner that read "Truth and diversity of opinion over PROPAGANDA" -- from a pro-Ukraine counter-demonstration of around 100 people near the city's central banking district.

Approximately 600 demonstrators staged a car convoy in the northern city of Hanover following an appeal by the Russian-speaking community, local police told AFP.

Police said they were closely monitoring the convoy. A counter-demonstration in the city under the banner "Support Ukraine!" attracted 3,500 people, according to police.

Similar protests were held on Saturday in Stuttgart and in the northern city of Lubeck, where around 150 people took part.

At least three dead as train derails near German resort

At least three dead as train derails near German ....

At least three dead as train derails near ....