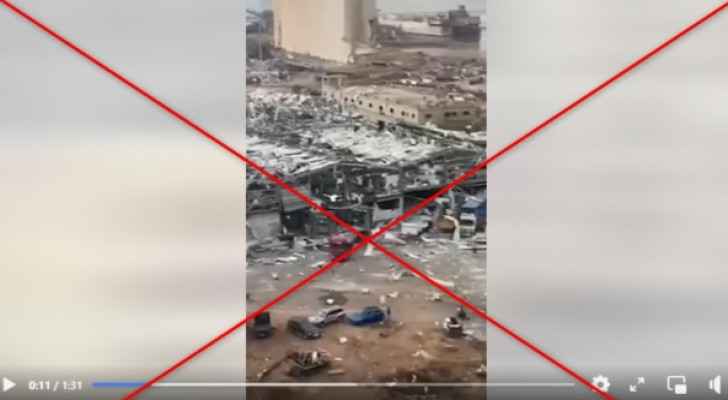 After the rise of the spread of misinformation online following the Russian-Ukrainian war, AFP released an article debunking a video that claimed it showed the "situation in Ukraine" when in reality it was taken in Lebanon in 2020.

“A video of heavily damaged buildings has been viewed hundreds of thousands of times online alongside a claim it shows the "situation in Ukraine" as a civilian disaster is growing in the country following Russia's invasion. But the video has been shared in a false context: it shows the aftermath of a cataclysmic port blast in Lebanon that leveled entire neighborhoods in the capital Beirut in August 2020,” AFP said.

The clip clearly shows streets of buildings that have been completely destroyed located near a port while a thick column of smoke billows in the distance.

The video's Burmese-language caption translates as: "The situation in Ukraine is all ashes and rubble. There are many dead bodies among the debris."

Hundreds of civilians have been killed and thousands wounded.

AFP reported on the developments here.

The video was also shared with a similar claim in Facebook posts here, here and here.

"Reverse image searches of keyframes on Google found the video was posted by British charity organisation Medical Aid for Palestinians on YouTube on August 5, 2020."

The video's caption reads in part: "Beirut is a scene of utter devastation today in the aftermath of a massive explosion at Karantina sea port that sent shock waves across Lebanon's capital yesterday afternoon."

A blast in Beirut's port shook the Lebanese capital on August 4, 2020, AFP reported.

The explosion leveled entire neighborhoods, took the lives of over 200 people, wounded 6,500 others and pummeled the lives of survivors.

Below is a screenshot comparison of the video in the false post (left) and the YouTube video (right).

Below is a screenshot comparison of the video (left) with the AFP photo (right), with similar features highlighted in red.

The video also corresponds to this photo geotagged at the port of Beirut on Google Maps.

AFP continued with a screenshot that shows comparisons of the video (left) with the image from Google Maps (right), with similar features highlighted in red.

The Russian invasion of Ukraine has prompted a spike in online misinformation, said AFP.

Arrest of 9 people suspected of shooting in Tayouneh: ....