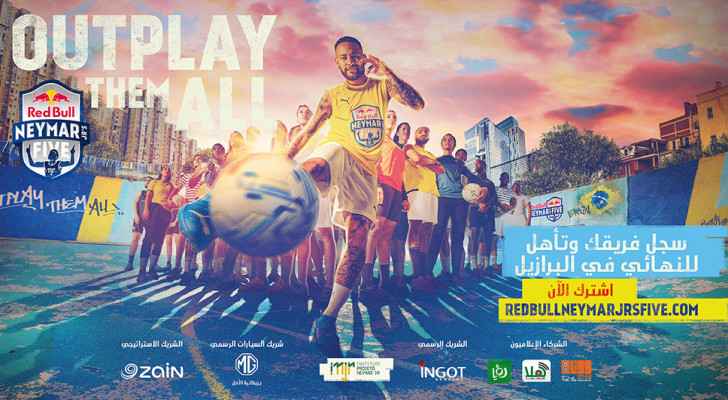 The Brazilian’s signature five-a-side tournament returns bigger than ever in 2022!

Amateur footballers from across the globe are looking forward to the return of the world’s biggest five-a-side tournament this year, which has kicked off with its eight qualifying rounds across Jordan. These qualifiers will take place in the below cities and dates:

The winner of the national finals will head to the super final, hosted by Qatar for the first time, where players battle it out in a unique footballing format. There are no goalkeepers, and every time a team scores, an opposing player is eliminated. Matches last for 10 action-packed minutes, or until one team loses all its players. This year, there’s also an added twist.

It’s shaping up to be a fascinating year of football for Neymar Jr, who is still hunting trophies with Paris Saint-Germain in Ligue 1 and the Champions League. Before he returns to Qatar later in the year to try to propel Brazil to glory at the World Cup, he will join the planet’s best amateur players for this tournament at the Qatar Foundation—a non-profit organization made up of more than 50 entities working in education, research, and community development.

Red Bull Neymar Jr’s Five is the Brazilian star’s signature five-a-side tournament bringing players aged 16 to 25 from all corners of the world together to celebrate their shared passion: football. It is a fast, technical, and fun competition. Countries across the globe will be hosting tournament qualifiers, where players will compete with the same dream of making it through qualifiers and national finals, to book a ticket to the World Final.

Learn more and register at: www.redbullneymarjrsfive.com