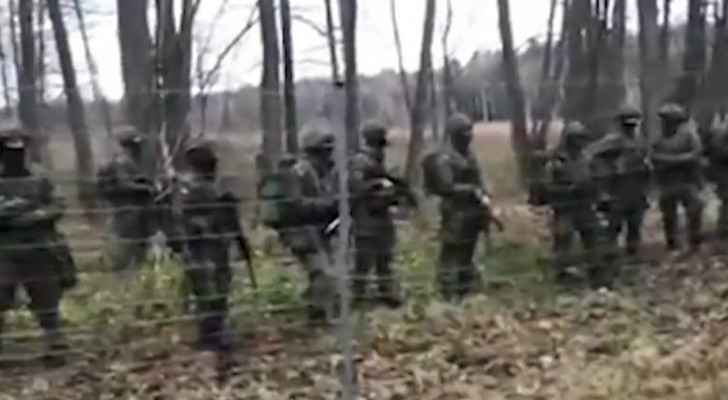 Poland said Saturday that Belarus has changed tactics in their border crisis by now directing smaller groups of migrants to multiple points along the European Union's eastern frontier.

Though there have been signs of the crisis easing, Defence Minister Mariusz Blaszczak said he expected the border showdown to be long drawn out.

Polish border guards reported new attempted crossings by several groups mostly consisting of dozens of migrants, even if there was one crowd of 200 people hurling rocks and using tear gas.

"We have to prepare for the fact that this problem will continue for months. I have no doubt that that will be the case," Blaszczak told the commercial RMF FM radio station.

"Now a bit of a new method has been taken on by the migrants and Belarusian services... Smaller groups of people are trying to cross the border in many places," he said.

He added that "there is no question that these attacks are directed by Belarusian services."

The West accuses Belarus of artificially creating the crisis by bringing in would-be migrants -- mostly from the Middle East -- and taking them to the border with promises of an easy crossing into the EU.

Belarus has denied the claim, instead criticising the EU for not taking in the migrants.

Belarusian President Alexander Lukashenko told the BBC on Friday that it was "absolutely possible" his forces had helped people cross into the EU but denied orchestrating the operation.

"We're Slavs. We have hearts. Our troops know the migrants are going to Germany... Maybe someone helped them," he said.

"But I didn't invite them here."

There were indications this week that the crisis was abating after several hundred migrants were repatriated to Iraq, while 2,000 others left a makeshift border encampment for a nearby warehouse.

Poland's border guards said that on Friday there had been 195 attempted illegal crossings.

"Eighty-two foreigners were ordered to leave Polish territory. Two Ukrainian citizens and one German citizen were detained for aiding and abetting," the guards tweeted Saturday.

They added that there were multiple attempts to cross at the stretch of border guarded by the unit in the eastern village of Dubicze Cerkiewne.

"The largest group consisted of around 200 foreigners, the others each numbered several dozen people," the guards tweeted.

"The foreigners were aggressive -- they threw rocks, firecrackers and used tear gas."

The migrants have abandoned everything in their countries, spending thousands of dollars to fly into Belarus on tourist visas, determined to reach the European Union.

On Friday the Council of Europe human rights commissioner Dunja Mijatovic called the humanitarian situation along the border "alarming" and demanded an end to Poland's controversial returns of migrants to Belarus.

"I have personally listened to the appalling accounts of extreme suffering from desperate people... who spent weeks or even months in squalid and extreme conditions in the cold and wet woods due to these pushbacks," she said in a statement.

"All pushbacks must end immediately."

Polish mothers have planned a rally for migrant rights Saturday in the eastern town of Hajnowka.

Polish media say at least 11 migrants have died since the crisis began over the summer.

Poland held its first burial for one of the migrants -- a Syrian teenager who drowned in the Bug border river -- this week and two other funerals are planned for the weekend.

Body of Syrian youth found on ....

Russia has 'nothing to do' with Belarus-Poland border ....