Taliban warns US, EU of refugee influx if sanctions continue 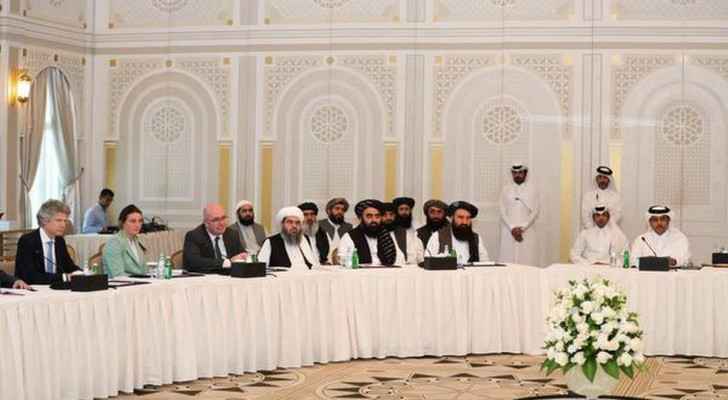 The new Taliban government has warned the envoys of the United States and the European Union that continuing to pressure the movement through sanctions will undermine security and may lead to a new wave of refugees.

In a statement published late Tuesday, the Foreign Minister of the Taliban government Amir Khan Muttaki told Western diplomats during meetings with them in the past days in Doha that "weakening the Afghan government is not in anyone's interest because this matter can directly affect the world in the field of security and lead to economic migration to flee the country."

The Taliban overthrew the US-backed Afghan government in August after a twenty-year war and established an "Islamic emirate."

However, severe international sanctions were imposed on the country, while banks lack liquidity and government employees' salaries are not being paid.

According to the statement, Mottaki said during the Doha meeting, "We call on the countries of the world to stop the sanctions and allow banks to operate normally so that charitable organizations and the government can pay the salaries of their employees from their own reserves and international aid."

European countries are particularly concerned that if the Afghan economy collapses, many Afghans will migrate, especially to Europe, which will increase pressure on neighboring countries such as Pakistan, Iran and the European borders.

Washington and the European Union have expressed their willingness to support humanitarian initiatives in Afghanistan, but they are reluctant to provide direct support to the Taliban without guarantees that they will respect human rights, especially the rights of women.

The European Union pledged Tuesday, during a virtual summit of the Group of Twenty, to provide one billion euros in aid, some of which will be allocated to urgent humanitarian needs and to the countries neighboring Afghanistan that received Afghans fleeing from the Taliban.

The movement asserts that it does not pose a threat to human rights, especially women's rights. However, girls are still prevented from learning in schools and secondary schools, except in the cities of Kunduz and Mazar-i-Sharif.

In the West, near Herat, Islamists carried out harsh punishments for alleged criminals, reviving the brutal and fundamentalist regime they imposed between 1996 and 2001, before they were driven from power by an international coalition led by the United States.

At least twice the bodies of criminals were hung by cranes, to set an example for others. On Tuesday, an alleged thief was flogged in public in the neighboring region of Obh.

The Taliban forced the men of the area to attend the flogging.

"I was afraid and desperate. Like everyone else, I could feel his pain when he was flogged," a doctor in his forties, who asked not to be named, told AFP.

He added, "Until now, I don't want to remember this scene" that affected him to the point that he wanted to quit his job and leave the area.