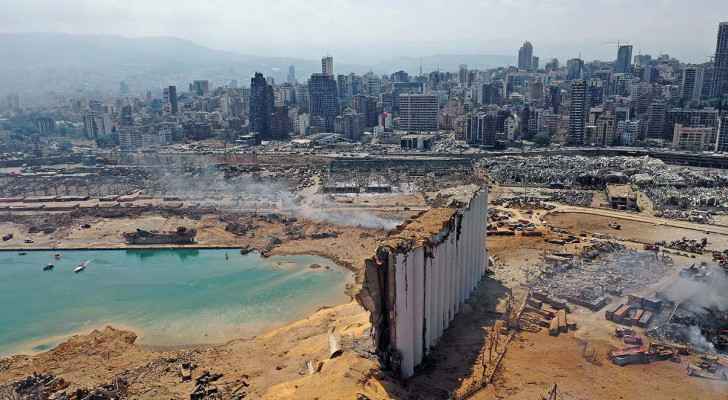 Judicial investigator Tariq Bitar, who is under increasing political pressure, suspended, on Tuesday, his investigation into the Beirut port explosion, after he was informed of a lawsuit filed by two former ministers requesting that the case be transferred to another judge, according to a judicial source.

The suspension of the investigation, which came a day after sharp criticism from Hezbollah, raises the fear of many that political pressures will lead to the dismissal of Bitar, similar to what happened with his predecessor Fadi Sawan.

A judicial source told AFP that Bitar was informed by the Civil Court of Cassation of a new lawsuit filed by former Finance Minister Ali Hassan Khalil and former Minister of Works Ghazi Zuaiter, "which necessitated the suspension of the investigation and the suspension of all sessions" until the court decides whether to accept or reject it.

The investigation was suspended shortly after Bitar issued an arrest warrant in absentia against Khalil for his failure to attend an interrogation session scheduled for Tuesday.

This is the third time that the investigation has been suspended, as Sawan suspended it once before being disqualified, as Bitar had suspended it last month following judicial complaints from Khalil and Zuaiter, who belong to the Amal Movement, and former Minister of Interior Nouhad al-Mashnouq, who was affiliated with the Future Movement led by Saad Hariri.

Since his claim against the former prime minister and his request to prosecute deputies, former ministers and security forces, Bitar has been subjected to political criticism, angering human rights organizations and families of the victims of the explosion that killed at least 214 people on August 4, 2020 and injured more than 6,500 others, in addition to widespread destruction in the capital.

The authorities attributed the explosion to the storage of large quantities of ammonium nitrate without protective measures. It later emerged that officials at several political, security and judicial levels were aware of the dangers of storing this substance and did nothing.

Sahar Mandour, a researcher in Lebanese affairs at Amnesty International, told AFP, "What we are witnessing today is a diary of obstruction of justice. Every day a new argument emerges to suspend or avoid the investigation, accompanied by massive media and political campaigns against the judge's person."

She added, "It is a series that aims to say that this ruling body of ruling parties and personalities does not accept accountability, so how about accountability?"

During the current month, the Beirut Appeals and Civil Cassation Courts rejected the defendants' requests to stop Bitar from the investigation. Subsequently, he set dates to interrogate Khalil, Zuaiter and Al-Machnouk, who are current MPs, on Tuesday and Wednesday, taking advantage of their lack of parliamentary immunity before the second regular session of Parliament on the 19th of this month.

Khalil did not appear on Tuesday before Bitar during the interrogation session. The judicial source stated that his lawyer attended on his behalf and asked to grant him additional periods of time to submit documents and submit formal defenses, but the judge considered that Khalil had failed to appear and issued an arrest warrant in absentia against him.

Shortly after the issuance of the arrest warrant in absentia against Khalil, the latter submitted with Zuaiter a request to respond to Judge Bitar again, which necessitated the latter's suspension of the investigation as soon as he was informed of the complaint.

Major political forces, led by Hezbollah, the most prominent military and political force backed by Tehran, and a group of former prime ministers, including Hariri, accuse Bitar of "politicizing" the investigation.

Monday, Hezbollah chief Nasrallah accused Bitar of working "in the service of political goals" and demanded a "honest and transparent" judge to complete the investigation.

He said, "We consider what is happening to be a very, very big mistake (...) the issue cannot continue in this way, and there is no possibility for it to continue, especially in the next few days."

Nasrallah's criticism came after local media professionals leaked last month a letter addressed to Bitar by a high-ranking party official, which included discontent with the investigation process and threatened to remove him from his position.

Lawyer Nizar Saghieh, executive director of Legal Agenda, a non-governmental organization concerned with legal research and human rights advocacy campaigns, told AFP, "There is a political decision not to allow him (Bitar) to work. It has legal means, but it is clear that there are parties willing to use illegal means to prevent him from working."