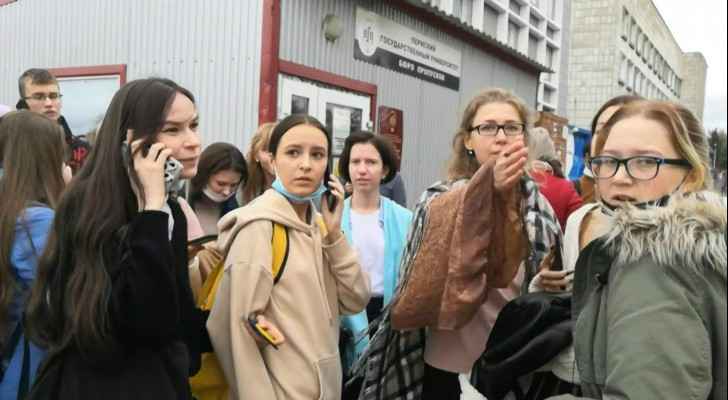 A gunman opened fire on a Russian university campus on Monday killing at least six people, investigators said, in the country's second mass shooting this year to target students.

Videos circulating on social media showed people throwing belongings from windows of university buildings in the central city of Perm before jumping to flee the shooter.

The Investigative Committee, which probes major crimes, said several people were injured in the attack at Perm State National Research University and that the suspect, a student at the university, had been wounded while being detained.

State media broadcast amateur footage reportedly taken during the attack showing an individual dressed in black tactical clothing, including a helmet, carrying a weapon and walking through the campus.

In a statement carried by Russian news agencies, the health ministry said 24 people were receiving treatment, including 19 who had received gunshot wounds. The health ministry declined to comment when reached by AFP.

"On September 20, a student, who was on the territory of one of the buildings of Perm State National Research University, opened fire on those around him," the Investigative Committee said in a statement.

Investigators had initially said five people were killed and another six wounded.

School shootings are relatively unusual in Russia due to tight security at education facilities and because it is difficult to buy firearms legally, although it is possible to register hunting rifles.

President Vladimir Putin had been notified of the shooting, the Kremlin said, adding that the health and science ministers had been ordered to travel to Perm to coordinate assistance for the victims.

"The president expresses sincere condolences to those who have lost family and loved ones as a result of this incident," Putin's spokesman Dmitry Peskov told reporters.

Regional authorities said that classes at local schools, colleges and universities were cancelled on Monday.

Russia's last deadly attack at an educational facility took place in May 2021, when a 19-year-old opened fire in his old school in the central city of Kazan, killing nine people.

Investigators said that the gunman suffered from a brain disorder. But he was deemed fit to receive a license for the semi-automatic shotgun he used in the attack.

On the day of that attack -- one of the worst in recent Russian history -- Putin called for a review of gun control laws.

In November 2019, a 19-year-old student in the far eastern town of Blagoveshchensk opened fire at his college, killing one classmate and injuring three other people before shooting and killing himself.

In October 2018, another teenage gunman killed 20 people at a Kerch technical college in Crimea, the peninsula Russia annexed from Ukraine in 2014.

He was shown in camera footage wearing a similar T-shirt to Eric Harris, one of the killers in the 1999 Columbine High School shooting in the United States, which left 13 people dead.

The Crimea shooter was able to legally obtain a gun licence after undergoing marksmanship training and being examined by a psychiatrist.

The country's FSB security service says it has prevented dozens of armed attacks on schools in recent years.

Jordan offers condolences to Russia over coal mine ....