Artists take part in cultural exchange between Jordan and the Netherlands

Artists take part in cultural exchange between Jordan and the Netherlands 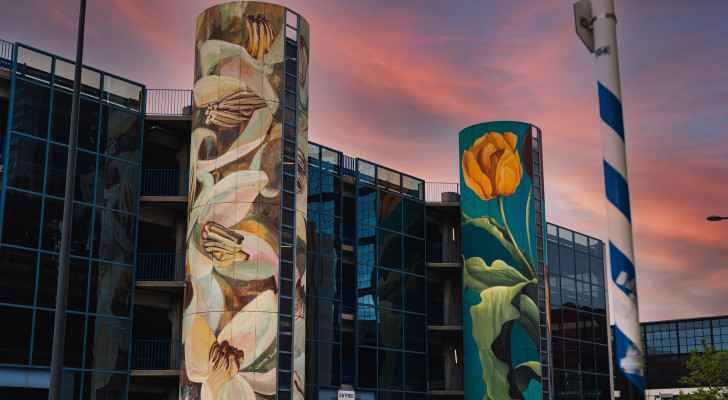 This year the Open Art Museum is collaborating with the Embassy of the Kingdom of the Netherlands in Jordan to bring “Open Art Shuffle” to life. Open Art Shuffle is a street art & cultural exchange initiative between Dutch and Jordanian artists where the artists get to swap countries, ideas and cultures, while leaving behind beautiful works of art in the form of large-scale murals.

The murals’ themes center around food security, water and intercultural exchange. They aim to shed light on the social, economic and environmental significance of these topics to both the Netherlands and Jordan. The murals also signify the special relationship between Jordan and the Netherlands in terms of agricultural cooperation, and the importance of sharing of knowledge and best practices.

Jordanian artists Yazan Mesmar and Miramar Al Nayyar completed two large murals in the city of Leeuwarden, in the Netherlands. Both murals, which measure 15m x 9m, are painted on the outer columns of the Markt 058 building.

“Many special traditions that help us nurture deep friendships with our neighbours have been developed by Jordanian communities. For example, when someone shares food with us we later return the plate filled with fruit, sweets or a recipe to show our appreciation. I activated the spirit of the ‘returning the plate’ tradition to conceptualise a mural that would honour and extend the important relationship between Jordan and the Netherlands”, said artist Miramar when asked about the concept behind her mural.

She added: “My mural depicts another important feature of Jordan’s natural landscape: the flowering palm tree. While palm trees grow all over Jordan, they are not present in the Netherlands due the cold winters. Therefore, I decided to use my art to donate the Netherlands a palm tree that will flourish all year long.”

When asked about his mural, artist Yazan Mesmar said the following: “Jordan has the highest rate of female participation in agriculture in the MENA region. My mural depicts a portrait of a proud woman, in a dress inspired by the traditional northern dresses that were worn to celebrate the beginning and end of the harvest season. The woman is surrounded by tulips, the national flower of the Netherlands to signify the transfer of knowledge and experience between the two nations and people.”

Dutch artist duo Studio Giftig and artist Tymon de Laat travel to Jordan from the Netherlands at the end of September to create their murals in the capital city of Amman.

This Open Art Shuffle initiative is financed by the Embassy of the Kingdom of the Netherlands in Jordan. The exchange would not have been possible without the support from Writers Block, Street Art Antwerp, the Greater Amman Municipality and the Jordan Tourism Board.

In 2018, the Dutch government designated Jordan as a priority country for reception of refugees in the region and committed 200 million Euro for development cooperation. The Netherlands has prioritised the horticulture sector for interventions because of its potential to contribute to economic growth, food security and employment generation for Jordanians and Syrian refugees. The aim is to increase production while at the same time use less water and less energy. The Netherlands takes a value chain approach, focusing on all stages from sowing to production to quality assurance to export marketing, while guaranteeing decent work conditions. In addition, a number of projects in the water sector are financed, focusing on water conservation, wastewater treatment and healthy ecosystems.