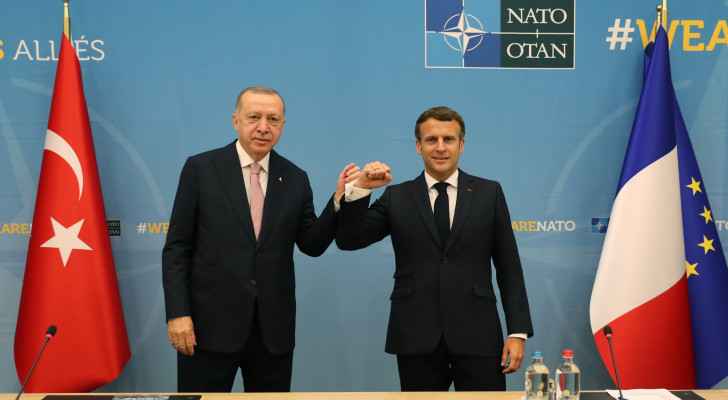 French President Emmanuel Macron met Monday in Brussels with his Turkish counterpart, Recep Tayyip Erdogan, with the aim of "clarifying" several issues in the Franco-Turkish dispute in recent years, according to the Elysee.

The bilateral meeting lasted 45 minutes at NATO headquarters before the official start of the alliance summit, and the French presidency said it was "intense and dealt with issues in depth."

The Elysee explained that "the two presidents wanted to discuss all issues in depth," noting that they had expressed "the intention (to make) progress together regarding Syria and Libya," which are two controversial issues between the two countries.

According to the same source, Macron also mentioned "his intention (to conduct) a strategic clarification between allies about values, principles and rules within NATO."

France and Turkey expressed divergent positions on a number of files within the alliance, most notably Paris' support for Athens in the face of Ankara's aspiration to exploit gas and oil resources in the eastern Mediterranean, leading to an accident between two Turkish and French ships in June 2020.

"When we are members of one organization, we cannot decide to carry out unilateral actions that run counter to the interests of the alliances we have built," Macron told reporters Thursday.

Also, relations between the two countries deteriorated due to differences over Syria, Libya and, finally, the Nagorno-Karabakh conflict between Azerbaijan and Armenia.

In October, Erdogan questioned the "mental health" of his French counterpart, accusing him of launching a "hate campaign" against Islam for defending the right to publish caricatures of the Prophet Muhammad and for his rhetoric on "separatist" Islam in France.

The Elysee said that "(the position) on Islam was clarified" during the meeting.

Regarding Fabien Azoulay, the Frenchman, who was sentenced to 16 years in prison by the Turkish judiciary for drug possession, Macron asked his counterpart to "allow a speedy transfer" to France, according to the presidency.

Macron: Afghan immigration is incomparable with ....

Macron: Afghan immigration is incomparable with ....