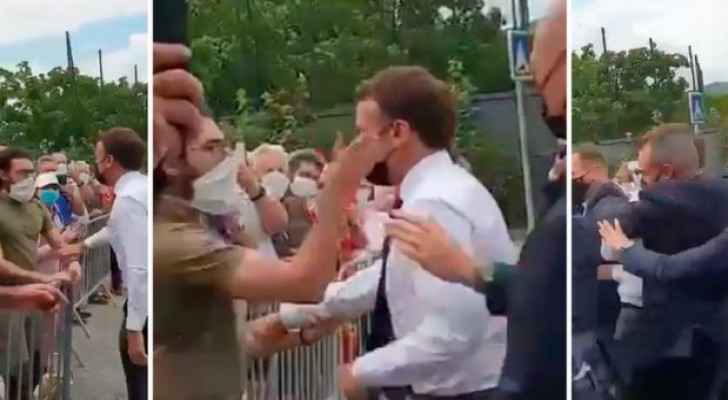 The French judiciary announced Wednesday evening that the young man who slapped the French President Emmanuel Macron Tuesday during a visit to southeast France will be tried Thursday according to the "immediate appearance" system that guarantees speeding up trial procedures, especially in cases of flagrante delicto.

The young man, identified as 28-year-old Damien Tarel was quickly arrested after the swipe Tuesday that caught Macron in the face with an audible thwack as the French leader was greeting a crowd.

He was heard to cry out “Montjoie! Saint Denis!” a centuries-old royalist war cry, before finishing with “A bas la Macronie,” or “Down with Macron.”

Tarel told the authorities that he slapped Macron without thinking. He is due Thursday afternoon in a court in Valence, in France's Rhone Valley.

The charge of violence against a person invested with public authority is punishable by up to three years imprisonment and a fine of EUR 45,000.

Another man was also arrested in the ruckus that followed the slap, identified by prosecution as Arthur C.

He will be judged at a later date, in 2022, for illegal possession of weapons.

Upon searching his home, investigators found that Arthur C. was in possession of books on the art of war, a copy of Adolf Hitler’s manifesto “Mein Kampf,” and two flags, one symbolizing Communists and another of the Russian revolution.

The duo do not have prior charges according to the authorities.

But, Tarel told investigators he was close to the economic protest movement that shook Macron's presidency in 2019 and also held right political convictions without being a member of a party or group, according to the prosecutor’s office.

Taliban calls on Afghan interpreters to 'repent' and stay ....

Macron informs Netanyahu of 'urgent need for the return of ....

Macron informs Netanyahu of 'urgent need for the ....