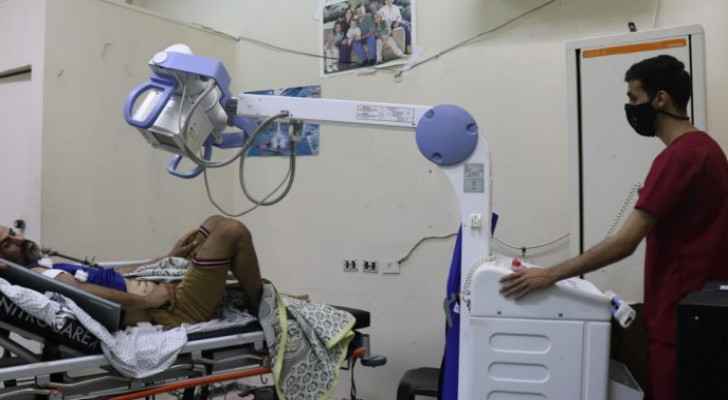 Jordanian medical reinforcement teams in Gaza continue to implement the royal directives, on the necessity of standing with the Palestinians in the Strip and providing them with distinguished medical care to alleviate their suffering and pain, in light of the difficult conditions that they suffered from as a result of Israeli Occupation aggression.

May 23, His Majesty King Abdullah II directed the government to implement a package of measures to support the Palestinians in Jerusalem and the Gaza Strip, amidst the Israeli Occupation's violations against them and the aggression on Gaza.

His Majesty's directives also include setting up and equipping a center for COVID-19 testing and vaccination in Gaza, after the central COVID-19 laboratory was demolished in the Israeli Occupation's aggression.

Moreover, His Majesty directed the government to continue transferring Gazans with severe injuries to receive medical treatment in Jordan’s hospitals, and to dispatch a number of child psychiatrists to the two Jordanian military field hospitals in the strip.

In turn, the hospital's commander, Colonel Faris Al-Huneiti, said: "the Jordanian medical team is keen to translate the directives of His Majesty King Abdullah II," adding that since their arrival they have conducted "advanced surgical operations inside the Jordanian field hospital, in addition to the local hospitals affiliated with the Ministry of Health in the sector."

The head of the Jordanian medical delegation, Haitham Al-Rbeihat, confirmed that the delegation is conducting a field survey on all the injured in various hospitals to find out the nature of their injuries and how to provide the appropriate treatment service for them.

Rbeihat noted that the hospital received a number of patients who underwent surgical operations who are now lying on the al-Shifa Medical Complex.

He added that a joint training program with local hospitals was launced to enhance the capacity of the multidisciplinary health care teams, which will allow the medical staff the opportunity to continue providing health and psychological care to all those wounded.

The director of the hospital, Mahmoud al-Swalqa, indicated that the hospital began to increase their capacity by equipping two operating rooms, an intensive care room, and a men’s and women’s surgery room with a capacity of 10 beds.

Swalqa indicated that the field hospital contains an ICU room with eight beds equipped with the latest medical specifications, and the patient reception department, which contains 14 beds, is equipped with all the necessary medical equipment.

He added that they have readily available medical staff, nursing staff and technicians to provide the best health care for the Palestinians.