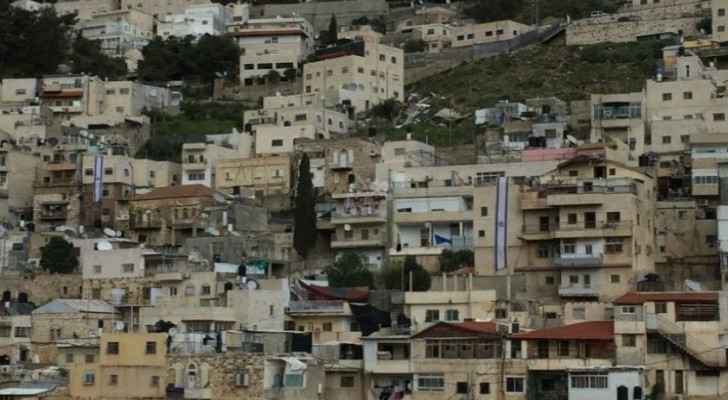 One of the neighborhoods in the town of Silwan in the occupied city of Jerusalem is facing new illegal expulsion threats, similar to those in Sheikh Jarrah.

On social media, users began using the #Save_Silwan hashtag to bring attention to the 800 people being threatened with displacement.

The Minister of Jerusalem Affairs, Fadi Al-Hidmi, warned against the consequences of the Israeli Occupation’s implementation of a new displacement and ethnic cleansing campaign.

Al-Hadmi's warning came on the eve of an Israeli Occupation court convening next Wednesday to consider a number of Palestinian families' petitions in Batn Al-Hawa neighborhood against decisions to evacuate from their homes in favor of Israeli Occupation settlers.

"In addition to the looming threat to evacuate Palestinian families from their homes in the Sheikh Jarrah neighborhood, dozens of families are also in danger in Batn Al-Hawa neighborhood in Silwan," he said.

"The Israeli authorities are planning a massive ethnic displacement process in Batn Al-Hawa neighborhood, with the aim of Judaizing Silwan, as part of the plans drawn up by Israeli settlement groups with the support of various Israeli government agencies."

He added, "The international community must act quickly to prevent the forced eviction of Palestinian families and their replacement by Israeli settlers."

Al-Hidmi indicated that not far from Batn Al-Hawa neighborhood, more than 100 homes inhabited by 1,550 Palestinians are threatened with demolition in the Al-Bustan neighborhood of Silwan.

He said, "We warn of the danger threatening these homes with demolition, after the occupation municipality rejected the engineering plans presented by the residents as an alternative to demolition."

He added, "The demolition of these homes would lead to the forced displacement of the residents of the neighborhood, while at the same time paving the way for the implementation of a settlement plan in the area."

Al-Hedmi saluted the public stand, especially the youth, in the face of the attempts of ethnic displacement in Silwan and Sheikh Jarrah and to change the status quo in Al-Aqsa Mosque.

He said, "What happened in the city of Jerusalem in recent weeks is like a loud cry by the Jerusalemites that stop wrongfully, stop oppression, and that Jerusalemites will not accept in any way their humiliation by the occupation."

Al-Hudmi called on the European and foreign foreign ministers and US Secretary of State Anthony Blinken to go to Sheikh Jarrah, Silwan and the Old City of Jerusalem and hear directly from the Palestinian residents about their tragedy.

He said, "Israel, the occupying power, is still striking at the wall with international law and international stances calling for calm, through a number of attacks, including closing the Sheikh Jarrah neighborhood with concrete blocks to restrict the population."