The latest: developments on eighth day of IOF aggression on Gaza

The latest: developments on eighth day of IOF aggression on Gaza 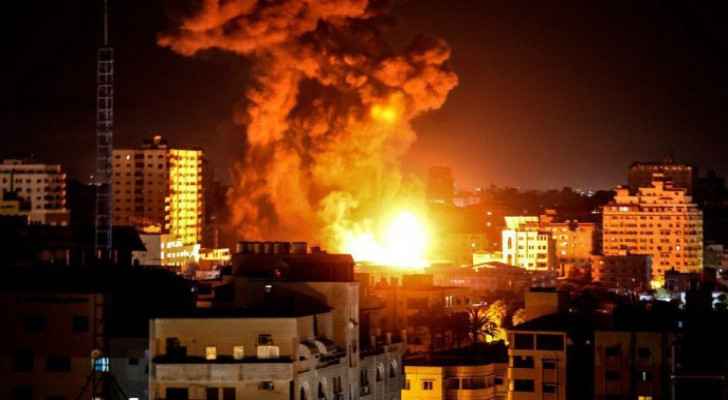 With the entry of the eighth day of the Israeli Occupation's aggression on Gaza, Al-Qassam Brigades fired a barrage of rockets towards Beersheba, after the enclave witnessed a horrific massacre committed by the Israeli occupation forces (IOF), leading to the death of 43 Palestinians, most of them children and women.

The IOF carried out dozens of raids and very intense and violent bombing and strikes through warplanes, artillery, military vehicles and gunboats, to wipe out entire residential neighborhoods and destroy dozens of streets, leaving scenes of destruction as if a catastrophic earthquake struck the region.

The toll of the aggression resulted in the death of 197 martyrs, including 58 children, 34 women and 15 elderly people.

Notably, according to medical data, 1,235 injuries have been reported since the beginning of the violence on Gaza.

A Palestinian was killed and another was injured when the IOF targeted a house in Jabalia in northern Gaza. Palestinian media reported that a Palestinian citizen identified as Ayed Ahmed Abdel-Mo'ti Masoud (24) was killed in the house of the Abu Raya family in Jabalia camp.

Two were injured as a result of IOF bombardment on Al-Batoun Street in Wadi Al-Salqa, Deir Al-Balah city.

A raid on agricultural land occurred in the vicinity of the Al-Saftawi area, in the northern Gaza Strip.

An unmanned warplane bombed an empty land near Al-Attar Mosque, west of Rafah.

The Israeli cccupation artillery renewed shelling upon the border areas in the eastern Khan Yunis governorate, south of the Gaza Strip.

An IOF spokesman confirmed nine homes belonginig to Hamas leaders were targeted throughout the Gaza Strip during the last hours.

Israeli Occupation warplanes bombed a target west of the city of Rafah in the southern Gaza Strip.

IOF warplanes pounded a house in Deir El-Balah, in the central Gaza Strip, destroying it.

Israeli Occupation warplanes launched a series of raids in the southern Gaza Strip.

IOF destroyed a four storey house belonging to the Ajjur family on Abu Hasira Street, next to Al-Shifa Hospital, which was empty of residents.

The violent raids on Gaza City targeted the vicinity of the Ansar complex, the coast of the beach, near Abraj Al-Maqousi, Al-Rasheed Street, the south of the city, and areas of the Al-Shifa Medical Complex.

The Israeli Occupation launched dozens of violent raids on separate areas in the Gaza Strip.

The IOF launched raids on agricultural land near the American School in Beit Lahia in the northern Gaza Strip.

The IOF bomb a farmland near a house in Jouret al-Lut, east of Khan Yunis, south of the Gaza Strip.

The Israeli Occupation used a drone to strike a house south of Gaza City, followed by IOF soldiers shortly after who completely destroyed the house.

12-year-old Palestinian dies of wounds sustained by IOF in ....