Protesters rally in Amman in solidarity with Palestine for third night

Protesters rally in Amman in solidarity with Palestine for third night 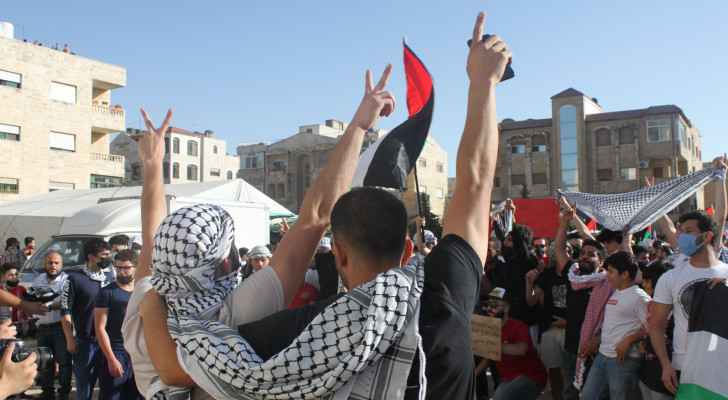 Tuesday, protestors gathered near the Israeli Embassy in Amman for the third night in solidarity with the Palestinian people, following weeks of Israeli Occupation violence that has left hundreds of Palestinian injured and dozens dead.

Some protesters came to show emotional support, whereas others had specific asks: remove the Israeli Occupation Embassy from Jordan, and withdraw its ambassador.

Monday evening, Hamas launched airstrikes near Occupied Jerusalem after the Israeli Occupation refused an ultimatum to withdraw from the Al Aqsa courtyard, the same place the Occupation had injured over 200 Palestinians Monday morning.

The increased violence comes as Palestinians continue to protest peacefully in the Sheikh Jarrah neighborhood of Occupied Jerusalem against illegal evictions from their homes in favor of Israeli Occupation settlers.

Israeli Occupation settlers, who number around 500,000 in the West Bank, constitute the biggest roadblock to any future two-state solution.