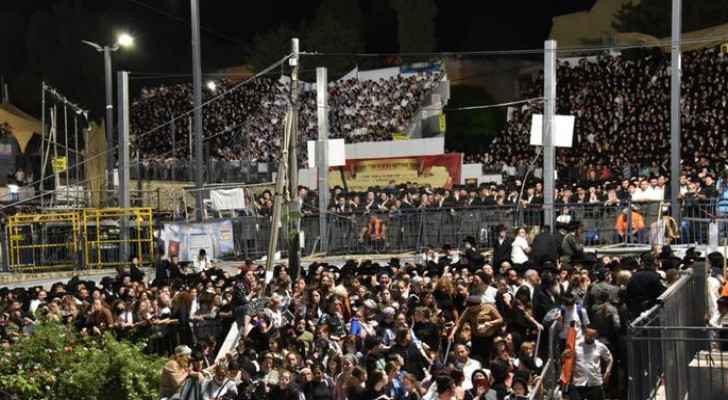 Early Friday morning, a stampede broke out at a religious gathering in the Israeli Occupation, killing at least 45 and leaving more than 100 injured.

The MDA previously announced the tragedy occurred during the annual pilgrimage to the tomb of Rabbi Shimon Bar Yohai in the northern Israeli Occupation.

At the time, the MDA said its crews "are struggling to save the lives of dozens of wounded, and will not surrender until the last victim is evacuated."

The ambulance teams said at first that the disaster was caused by the collapse of a grandstand, but they later said victims had fallen as a result of a huge "stampede."

The New York Times reported that the incident occured after several people "slipped on stones leading into a narrow passageway with a sloping, medal-covered floor."

Paramedic Yehuda Kotlib, who works for the United Hatsala organization, said that he saw men "crushed" and "lost consciousness."

Prime Minister Benjamin Netanyahu described what happened as a "major disaster," noting that he "prays for the wounded."

In turn, opposition leader Yair Lapid said, "The whole of Israel is praying for the recovery of the survivors," noting that he is following developments "with concern."

Thursday night, thousands flocked to the event, considered the largest the Israeli Occupation has seen since the beginning of the Covid-19 pandemic.

But the local press confirmed that number to be closer to 100,000.

In 2020, Israeli Occupation authorities arrested hundreds of worshippers who attempted to gather for the pilgrimage in violation of COVID-19 restrictions.

They allowed the gathering to take place this year in light of the Israeli Occupation's aggressive vaccine campaign.
Since December, more than five million Israeli Occupation residents have received the vaccine, or 53 percent of the population.