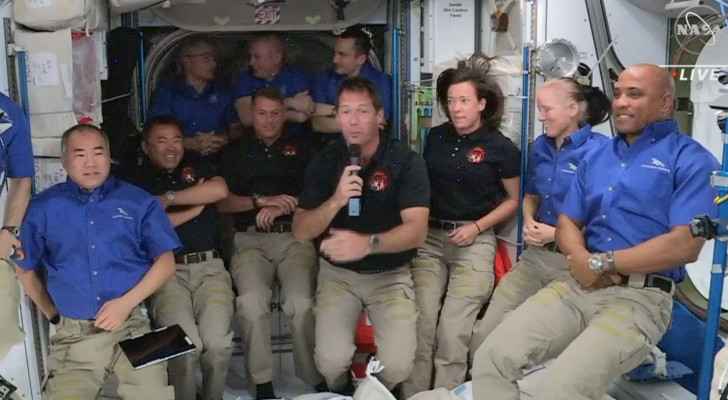 The spacecraft named Endeavour, piloting herself autonomously, locked on to a docking port at 5:08 am Eastern time, approximately 420 kilometers above the south Indian Ocean.

Two hours after the process was completed, Endeavour's quartet posed for photos with the last crew of four sent by SpaceX, and three Russian cosmonauts, making the ISS unusually crowded with a total of 11 people.

Astronaut Thomas Pesquet of France said "It's been 20 years... since JAXA (Japan Aerospace Exploration Agency), and ESA (European Space Agency), and NASA and Russian astronauts have been together in space, so it's actually pretty historic what's happening today."

Friday, the Crew-two mission blasted off on its 23-hour journey from the Kennedy Space Center in Florida before dawn.

Endeavour first flew to the ISS on the Demo-2 mission in May 2020, ending almost a decade of US reliance on Russia for rides to the ISS following the end of the Space Shuttle era.

Two Crew Dragons are now parked at right angles to each other at the ISS, underscoring hard-charging SpaceX's position as the US space agency's premier transport provider.

Musk has made no secret of his desire to drive humanity onward to the Moon and Mars, and told a post-launch press conference "I think we're at the dawn of a new era of space exploration."

The Crew-2 mission's other crew members are Shane Kimbrough and Megan McArthur of the United States, as well as Akihiko Hoshide of Japan.

Hoshide will assume command of the ISS once Crew-1 departs for Earth, which is scheduled for April 28.