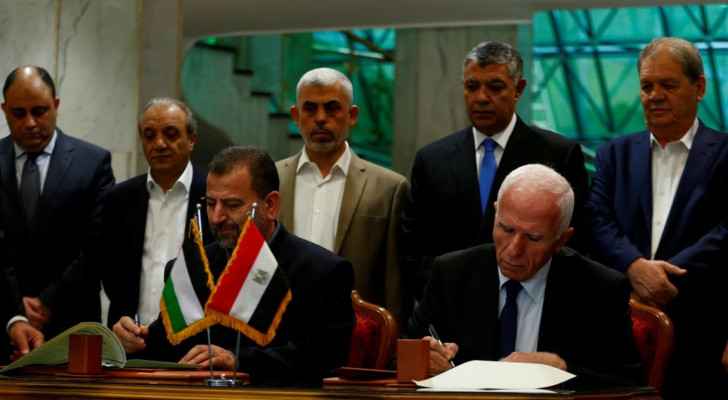 Fatah and Hamas are holding new talks in Cairo beginning Tuesday in preparation for the first Palestinian elections in 15 years.

The Palestinian factions, led by these two movements, pledged last month in Cairo to establish an independent electoral court to rule on potential grievances and to respect the election results. The last Palestinian elections were held in 2006.

In June 2007, the secular Fatah movement clashed with the Islamic Hamas movement after power disputes related to security issues, which led to bloody fighting in the Gaza Strip, after which Hamas took control there and expelled Fatah.

The Palestinians will go to the polls on May 22 for the legislative elections, while the presidential elections will be held on July 31.

"We in Hamas are ready for all options and to overcome all difficulties and obstacles in a dialogue tomorrow in Cairo," said Khalil al-Hayya, a member of the political bureau of Hamas in the Gaza Strip.

"We will discuss the points related to the elections, Hamas is ready for all options," he added.

He explained, "We prefer the largest Palestinian consensus among all in the elections. After the legislative elections, we want to form a national unity government, whatever the results, and we prefer that it agree on a single national candidate for the presidential elections."

In Ramallah, in the occupied West Bank, the spokesman for the Palestinian presidency, Nabil Abu Rudeinah, said that "there will be no reversal of the decision to hold the general elections, because it is a democratic and popular entitlement."

He continued, "The position of the president and the leadership is that it should be conducted according to presidential decrees, on clear and sound rules."

Last week, the Fatah movement dismissed one of its most important figures, from the Fatah Central Committee and from the movement’s membership, Dr. Nasser Al-Kidwa, the nephew of Yasser Arafat and the former head of Palestinian diplomacy, against the backdrop of his decision to form an independent list from the movement to participate in the upcoming legislative elections.

During his meeting with a group of journalists on Monday, Nasser Al-Kidwa expressed his fear of compromising his personal safety.

He noted that a 'war' is being waged against him.

"From the first day, we did not hide our strong desire to work with Marwan Barghouti, and his natural place is between us," Al-Kidwa said.

Relatives of Marwan Barghouti, the most popular Palestinian politician who has been in Israeli jails for nearly 20 years on charges of violence, told AFP recently that "Marwan may support a list other than Fatah by being a candidate for the presidency in the face of Mahmoud Abbas."

Al-Kidwa stressed, "If Marwan runs for the presidency, I am committed to him and I will not compete with him, but if he wants to be on his own list, then he is free."

Overwhelming percentage of Palestinians registered to ....