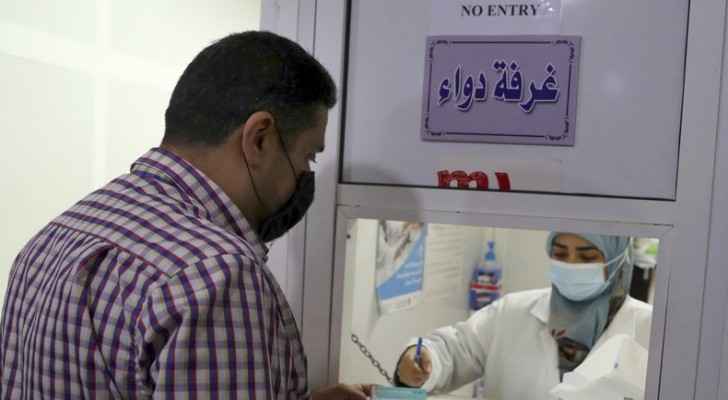 From one pharmacy to another, Abbas wanders in search of aspirin, while Nadine tries in vain to find milk for her baby. On social media, many are asking about ways to secure COVID-19 medicines in Lebanon, which is mired in its worst economic crisis.

"I asked about two drugs ... and I did not find them," said Abbas Suleiman, 37, explaining that he had no choice but to resort to the black market in the hope of finding them.

"I didn't even find shampoo," he adds sarcastically. "The country is heading to the end."

For months, the country has been witnessing, in the wake of the persistent economic and financial collapse, a great shortage of medicines that are mostly imported from abroad, whether those used to treat Covid-19 patients or chronic diseases, down to regular painkillers and even vitamins.

However, in recent weeks, and with the high count of coronavirus infections, long queues have appeared in front of pharmacies.

In the black market, price of some medicines have reached incredible levels. This led, according to health sector workers, to an unprecedented crisis, with which drugs used to treat the Coronavirus are not available except in small quantities, even in hospitals.

The oxygen devices used in homes were also cut off because people were rushing to hoard them. According to the Syndicate of Medical Supplies Importers, counterfeit devices of unknown source have spread to the market in huge sums.

Every time a TV station hosts a doctor or reports spread about the possibility of using a drug in the treatment of Covid-19, people are flocking to buy it even if they are not infected, which is what happened recently with the anti-parasite drug Ivermectin. Reports claimed that the drug, which Lebanon was not importing in the first place, is a potential treatment for the virus, despite assertions from the highest global medical references that there is insufficient evidence to promote it as a treatment.

The rush, according to what Karim Jabara, the head of the Drug Importers Syndicate, told AFP, "led to the emergence of a black market that no one was able to curb," after unofficial parties managed to bring in it from abroad.

He explained that the price of its sale on the black market reached 300,000 pounds, equivalent to $35 according to the unofficial exchange rate. It formerly sold for 8,000 pounds.

Two companies, one of them local, that produce two types of aspirin, delivered to the markets more than 500,000 cans during the month of January. The volume of natural demand during the year 2020 was 200,000. Despite that, the drug is not currently available.

Drug importers are currently working, according to the instructions of the Ministry of Health, to deliver pharmacies to specific quantities to reduce home storage and smuggling operations, especially after travelers were arrested at Beirut airport with quantities of medicines and one of the subsidized medicines was found to be sold in the Democratic Republic of the Congo.

Jabara explains, "There is a state of panic feeding itself: we have storage (at home), and smuggling of which we do not know the size," especially through the airport to Egypt, Iraq and African countries, in addition to "a delay in financial transfers abroad from the Bank of Lebanon."

Smuggling flourished mainly, according to Jabara, as a result of the preservation of the subsidized price of medicines, which made the subsidies go unworthy.

As for financial transfers abroad, Jabara explains, "If the drug manufacturer abroad does not receive his dues on time, he will not deliver the drug, and thus the shipment to Lebanon will be delayed."

As its dollar reserves are gradually depleted, the Banque du Liban is facing increasing pressure to secure the basic needs supported by it, on top of which is medicine. The circulation of news of a tendency to remove subsidies raised the demand, fearing that the medicine would be cut off or its price would rise in light of the deterioration of the price of the lira, which lost more than eighty percent of its value.