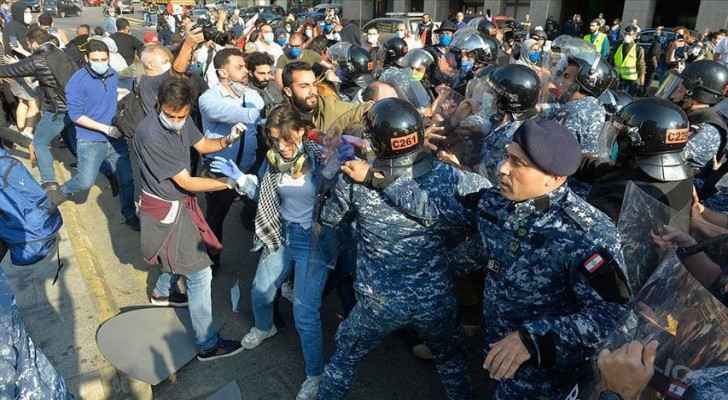 A young protester died from injuries sustained during clashes Wednesday night in Tripoli.

For the past three days, citizens have been rallying against Lebanon's general closure that has had adverse economic ramifications in the crisis-hit country.

Ahmed Tayba confirmed the death of his brother Omar, 29, in the hospital Thursday morning.

"We are preparing to bury him now," he said briefly to France Press, explaining, "Omar was not among the demonstrators, but was following what was going on."

The National News Agency reported that he would pray over his body after the noon prayer in the Bab al-Tabbaneh cemetery.

Omar worked in a bakery in Tripoli. He is a resident of one of the poor, popular neighborhoods in the city, which witnessed violent clashes on Wednesday night for the third consecutive day, leaving 226 wounded, according to the National News Agency.

Protesters fired stones, firecrackers, and Molotov cocktails at the security forces as they attempted to storm the Serail of Tripoli, which is the most prominent security and administrative center in the city and a police headquarters.

Security forces and the Lebanese army responded with rubber bullets and tear gas.  An AFP correspondent reported that live bullets of unknown origin were heard in the city at night.

"We made a decision to continue our actions, regardless of the cost (...), because we have nothing left to lose in the country," said Mohammed, 25, a masked protester who recently lost his job in the auto repair business.

He added, "We live in miserable conditions. There was not one door I did not knock on, but I did not find a job opportunity that would secure our daily sustenance."

Tripoli, the second largest city in Lebanon, was originally one of the poorest cities in the country, before the start of the economic collapse and then the outbreak of coronavirus, which prompted the authorities to announce a tight lockdown with a round-the-clock curfew that began two weeks ago and continues until Feb. 8th.