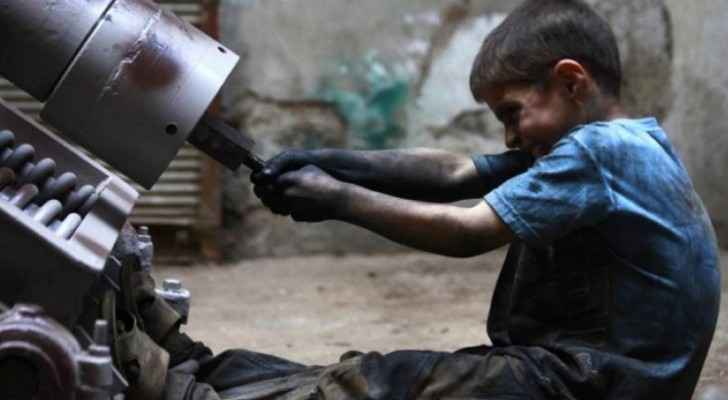 The suspension of in-class education and switch to distancing learning has led thousands of children to join the labor market, especially since many families lost their sources of income due to the coronavirus crisis and related restrictions.

Thousands of additional children joined approximately 76,000 others that were already working before the pandemic, according to official figures published in 2016.

A seventh grader, identified as Omar, has been working at a shop that repairs kerosene and gas heaters in East Amman for the past four months. Omar covers a 12-hour shift every day for which he gets paid JD 3 Omar said "I hope this pandemic will end, so I can go back to completing my studies and achieve my dream of becoming a pilot."

The number of working children in Jordan increased from about 33,000 in 2007 to nearly 76,000 in 2016, despite the existence of laws that prohibit children under 16 years of age from working. No official numbers have been announced regarding the current number of children in the Jordanian workforce.

The representative of the United Nations Children's Fund (UNICEF) in Jordan Tanya Chapuisat said, "We do not have specific new numbers, but we know that the numbers have doubled between 2007 and 2016, and we believe that with the pandemic the numbers will be worse," especially since poverty has been increasing.

Khader Abu Zeid (58), who works at a car rental shop, said most working children are between the ages of 12 and 17 and earn approximately JOD 5 every day.

Mustafa (12), who rents a car every day and transports products inside a market, said "There are no schools now. I have been working for months every day, transporting vegetables and chickens in the market." He continued saying, "I work from nine in the morning until about nine in the evening" and earns JOD 5 on a daily basis. Mustafa has to work because his father and two brothers work as day laborers and have not been able to find work.

According to official figures from the fall of 2020, the poverty rate stood around 15.7 percent but has risen to nearly 23 percent.

The director of the Jordanian Labor Observatory Ahmed Awad said, "The main factors affecting the increase or decrease in child labor are the level of poverty and the effectiveness of the education system," both of which have been negatively affected by the coronavirus crisis.

"Poverty rates increased significantly with the decrease in wage levels as a result of the imbalance of supply and demand, closures and government procedures, and there are those who were dismissed from their work. The second main aspect is education, and as you learned in the two semesters, there was no quality education," he explains.

The country coordinator of International Labor Organization in Jordan Frida Khan described the situation of child labor in Jordan as "worrying", adding that "most families have a simple level of education and are unable to help their children with distance learning." She spoke about the difficulties of distance learning saying, "one in four children does not access distance learning platforms and only 31 percent of all children have the internet." She added that "the distance learning system may be effective for some Jordanians, but we care about those who are the most vulnerable."

Child labor on the rise in Jordan: Jordanian Labor ....