Jordan one of centers of origin for olive trees’ cultivation throughout ages: study

Jordan one of centers of origin for olive trees’ cultivation throughout ages: study 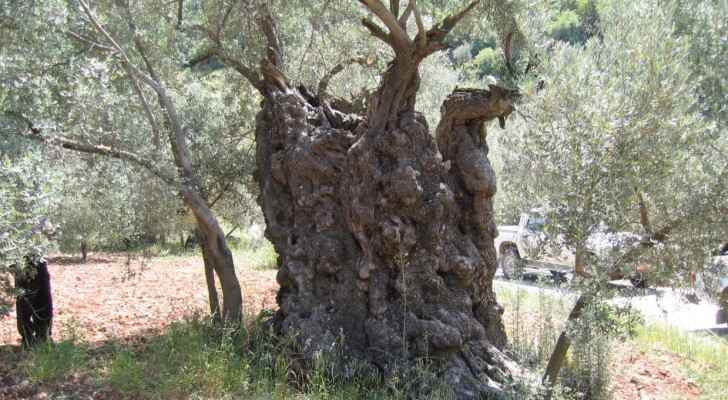 In a scientific discovery achieved by a research team from the National Agricultural Research Center (NARC) and two Jordanian Universities, Nizar Haddad, the Director General of NARC and the leader of the research team, declared that the historical olive cultivar 'Mehras', from ‘Maysar’ area in Hashemiya town of Ajloun, is considered one of the oldest genetic olive genotypes in the Mediterranean region.

According to the NARC study results, the phylogenetic analysis showed that 'Mehras' was genetically the closest to be a source of origin for the cultivated olives in Spain, Italy, and Cyprus and was included in the same genetic group. This research comes as part of a national plan led by NARC in partnership with many researchers in Jordanian Universities to document the genetic maps of several species and breeds of crops and animals with agricultural importance.

Hussein Miqdadi, a senior researcher of genetics and biotechnology at NARC, said that 'Mehras' is a genuine ancient ancestor that has preserved its existence through the ages, and its genetic fingerprint has proven its rich and unique genetic diversity between available olive genotypes around the Mediterranean basin, with genetic features of significant implications on the ability of 'Mehras' to adapt to climate changes and harsh environments maintaining a distinctive olive oil quality.

Head of Horticulture and Crop Science Department at the University of Jordan, Monther Sadder, stated that one of the most important results of this project is to maximize the utilization of Jordanian genetic ancestors through the geographical indicators of documented 'Mehras' olive oil.

Sadder also mentioned that the results of the nucleotide sequence of the 'Mehras' genome showed that it has a unique genetic diversity at the molecular level. According to the study, significant mutations exceeded 15 million SNPs affected olive trees; nearly half a million are evident in the genetic coding regions with great influence by altering amino acids.

However, Mohammad Brake, a specialist in biotechnology at the University of Jerash, assured the strong linkage of the study outputs with the archaeological discoveries which proved that the oldest human settlement ever known olive trees was in the Jordanian ‘Hadib Al Reeh’ village in Wadi Rum, which dates back to 5400 years BC; a fact that can be employed by NARC for the benefit of the Jordanian olive sector according to the permaculture researcher, Eng. Yahya Abu Sini, through enhancing the comparative advantage and added value of the Jordanian 'Mehras' Perennial Olives.

The Director of the Horticulture Research Directorate at NARC, Salam Ayoub clarified that the results of studies carried out by NARC had proved the high percentage of oil of 'Mehras' olives which reaches 30 percent, and considered one of the highest percentages among olive varieties in the world.

“A distinctive composition of fatty acids also characterizes 'Mehras' oil, with one of the highest percentages of Oleic Acid that reaches 70 percent comparable to other varieties, in addition to the sensory properties and the distinctive fruity flavor of 'Mehras' oil in particular," Ayoub said.

On the reason for choosing the name 'Mehras' instead of 'Romi' olives, Nizar Haddad explained that the cultural heritage, especially in Ajloun, distinguishes between the sizes of olive trees; the name 'Oud' is used for the young tree, the name 'Al Qaroud' is used for the medium-sized perennial olive tree, while the name 'Mehras' is used for the large-sized old olive tree, whose trunk can be surrounded by the arms of three men. For distinguishing the complete genome from other entries, the international Gene Bank demands giving local names or symbols for the complete genome. In this context, NARC seeks to enhance the comparative advantage in the economic value chain of olive trees, oils and products, and their employment in agro-eco-tourism.

Haddad further explained that NARC has developed a national plan to establish three gene banks for 'Mehras' olives as an important source of origin for olive cultivars in the Mediterranean region; and in cooperation with nurseries of the Ministry of Agriculture, seedlings of 'Mehras' olives will be produced to be disseminated among farmers due to their superiority in a number of characteristics even over the 'Nabali' variety that is widespread in Jordan. Furthermore, statistics of the Ministry of Agriculture estimates the number of olive trees in Jordan at about 18 million trees. Dr. Haddad also stated that NARC is conducting several of applied research projects to improve productivity, efficiency, quality and competitiveness of Jordanian olive oil globally, and that NARC provides free olive oil analysis services to farmers.

To read the scientific publication, visit the following link: www.tandfonline.com