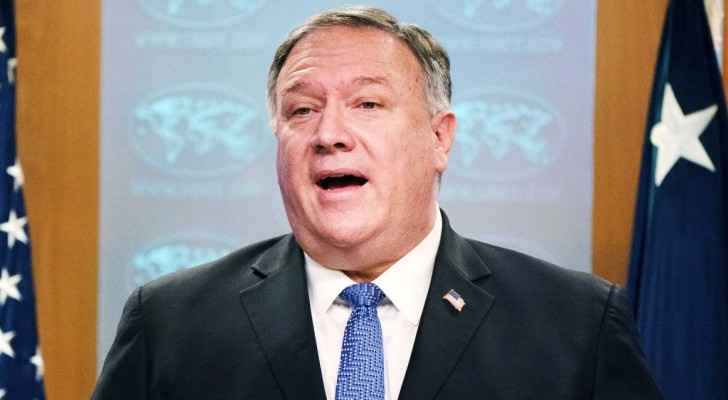 US Secretary of State Mike Pompeo called Thursday for the "immediate" and "unconditional" release of 53 pro-democracy opponents arrested on charges of "sabotage" in Hong Kong and threatened those responsible for the crackdown with penalties.

Pompeo stressed in a statement that "the United States will not stand idly by while Hong Kong residents are exposed to communist suppression."

He indicated that the United States would consider imposing "sanctions and restrictions on every person or entity involved in this attack targeting Hong Kong residents."

Pompeo, who will leave office in two weeks, said the United States would "consider imposing restrictions" on the Hong Kong Representative Office in Washington.

Wednesday, more than 50 pro-democracy opposition figures, including an American lawyer, were arrested in Hong Kong, in the largest crackdown so far under China's latest national security law.

Thursday, dissident Joshua Wong, who is behind bars for his role in the massive demonstrations that rocked Hong Kong in 2019, joined the ranks of these figures who are being prosecuted for "sabotage."

In this operation, in which a thousand operatives participated, the Hong Kong police arrested the activists on charges of "sabotage."

Pompeo, a vocal critic of Beijing, said he was "shocked" by the arrest of John Clancy, an American lawyer working for a company known to handle human rights cases.

"Let me be clear: The United States will not tolerate arbitrary arrest or harassment of American citizens," he said.

Pompeo said these arrests showed "the Chinese Communist Party's contempt for its people and the rule of law."

"For a while, we have seen a minority of anti-China politicians in the Trump administration continue to display their madness, using the remainder of their mandate to deliberately undermine Sino-US relations and serve their own political interests. This kind of move goes against the direction of history and (...) will certainly be punished," she added.

Pompeo also announced that Kelly Craft, the US ambassador to the United Nations, would soon travel to Taiwan, describing the island as a "reliable partner and a vibrant democracy that has managed to prosper despite the efforts of the Chinese Communist Party to undermine its great success."

"Taiwan shows what a free China can achieve," he added.

In the year 2020, the Chinese authorities began to tighten their grip on the former British colony, which in 2019 witnessed unprecedented popular demonstrations.