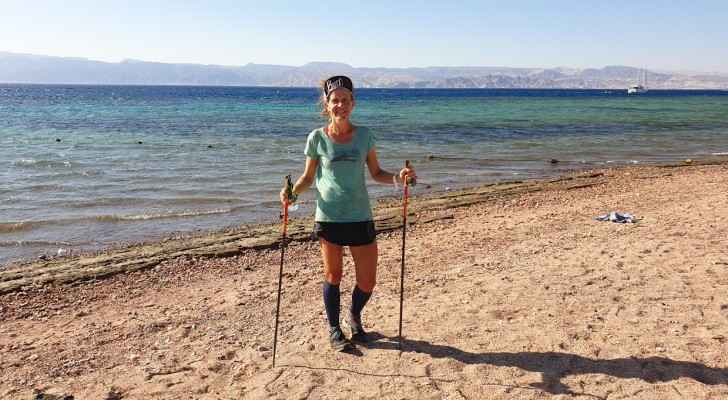 American ultramarathoner, Amy Sproston, has set a new record for completing the Jordan Trail in eight days, nine hours and 28 minutes, on Saturday.

Sproston completed the 675km-long path, which runs from the North to South of Jordan, starting from Umm Qais and ending in Aqaba.

By setting a new record, Amy became the first woman to complete this track and also broke the record set by British runners Robbie Britton and Dan Lawson, who completed the same distance in nine days, 10 hours and 17 minutes.

Upon reaching the finish line, Amy said “the furthest of my ambitions as an ultramarathoner, is to market the picturesque aesthetic, terrain and landscape of Jordan through jogging.”

"This is a great opportunity to highlight the beauty of Jordan and support local and adventure tourism, especially in a year that witnessed exceptional circumstances due to the world's fight against the coronavirus, which led to the cancellation and postponement of many sporting activities and events and difficulties of travelling. Additionally, I am passionate about sending an explicit invitation to foreign runners, and those who are passionate about jogging in Europe and America, to visit Jordan, and to discover the beauty of its cities and its beautiful aesthetic landscapes,” she added.

Several US embassy personnel supported Amy by joining her on parts of the track. “I had amazing support so it was great to be able to finish with a team and set a new record” she added.

In the future, Amy hopes to share her passion and enthusiasm to inspire local athletes, especially women, to take part in big adventures, while promoting the Jordan Trail and the rich history of its attractions.