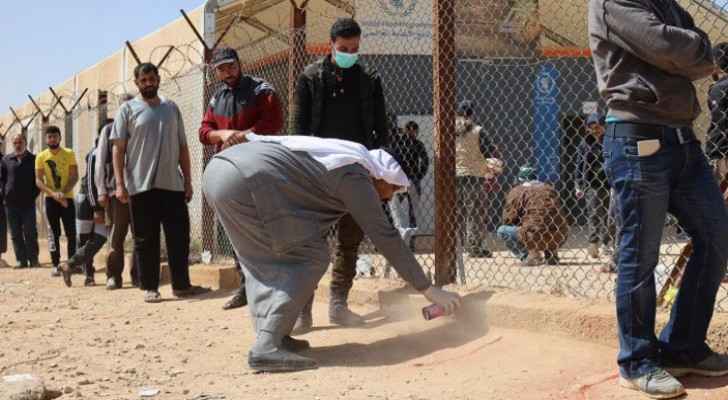 Five COVID-19 cases were confirmed among Syrian refugees in the Zaatari and Azraq camps since the beginning of the pandemic, announced the United Nations High Commissioner for Refugees(UNHCR), on Saturday.

The Ministry of Health has trained medical teams in both camps to conduct COVID-19 tests. The UNHCR has established centers where PCR tests can be conducted.

Refugees who have tested positive for the virus were tranferred to quarantine areas in the Dead Sea region.

The UNHCR has built quarantine areas in Zaatari and Azraq camps for isolating purposes and anyone who came into contact with the five confirmed cases will be quarantined in these areas.

"Our cooperation with the Ministry of Health and Syrian Refugee Affairs Directorate (SRAD) has been crucial during this time. We are incredibly grateful that refugees continue to be included within national health systems here in Jordan," said the UNHCR Representative in Jordan, Dominik Bartsch, in a statement.

He added, "The developments this week have obviously been a worrying situation for all, but especially for refugees living in the camps. Crowded spaces and cramped living conditions make social distancing difficult. We are encouraged by the fact that refugees are doing all they can to minimize the risk of transmission."

However, the United Nations(UN) has denied the false reports circulated on social media which claimed that the UN has informed its staff to change their work operations in light of the health situation in the country.