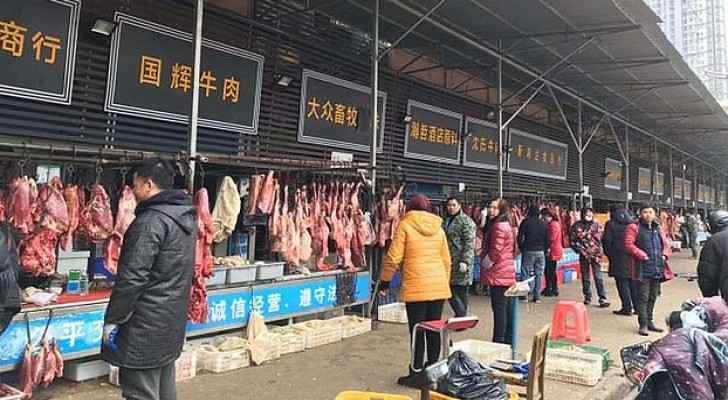 A woman selling live shrimps was the first person to test positive for coronavirus from a food market in Wuhan, the epicenter of coronavirus pandemic, according to a document leaked to foreign media.

Ms. Wei lived in a rented flat less than 500 meters (1,640 feet) from the marketplace and developed a fever on December 11, the Daily Mail reported.

She thought she had the seasonal flu and went to a small and crowded clinic nearby to seek medical advice. However, injections did not cure her illness.

According to The Wall Street Journal, she is 57 years old and her full name is Wei Guixian.

Ms. Wei, believed to have recovered, recalled her initial symptoms to the Chinese news outlet, The Paper: "I felt a bit tired, but not as tired as previous years."

She added, "Every winter, I always suffer from the flu. So I thought it was the flu."

Earlier In January, the Chinese Center for Disease Control and Prevention announced that the coronavirus had been passed onto humans by wildlife sold as food in the Huanan Seafood Wholesale Market, where Ms. Wei worked.

She said she continued to sell seafood in the market while sick and went to a bigger hospital for second medical advice later on.

"The doctor at the hospital could not figure out what was wrong with me and gave me pills," she explained.

She took the medicine but did not feel better. She went back to the small clinic to ask for more injections.

"But then I felt a lot worse and very uncomfortable. I did not have enough strength or energy," she said.

On December 16, she headed to one of the city's biggest hospitals, the Wuhan Union Hospital, for a proper check.

There, a doctor described her illness as "ruthless" and told her that several other people from Huanan had already come with similar symptoms.

"At that time, there were many people in the hospital," she added.

Ms. Wei was one of the first 27 patients diagnosed with COVID-19, the disease caused by the coronavirus, according to a statement from Wuhan Municipal Health Commission on December 31. Among the infected, 24 had direct links with Huanan.

The authority said at the time that no evidence had shown the virus could be passed from human to human.

Yet, the identity of the first COVID-19 sufferer, also known as the "patient zero", remains a mystery in China.

Although Ms. Wei is the first to test positive in the market, the first known coronavirus patient is reported to be a bed-bound pensioner in his 70s.

The unnamed man developed symptoms on December 1 and had not been to the seafood market beforehand, a doctor told BBC.

Classified government records showed that the first case of a person suffering from COVID-19 could be traced back to November 17.

The date is more than seven weeks before Chinese officials announced they had identified a new virus and over two months before various cities in the region went into lockdown to contain the spread of the bug.

Unpublished data showed Chinese authorities have identified at least 266 people who were infected before December 31 – a time when Wuhan authorities were busy punishing a group of doctors for sounding the alarm of a 'SARS-like' disease.

Chinese officials claim the first coronavirus patient fell ill on December 7.
Beijing is now rejecting the widely held assessment that the city of Wuhan is the birthplace of the outbreak after the number of daily infections there dropped to zero but soared in Europe.

Dr. Zhong Nanshan, the leader of a team of experts appointed by China to tackle the health crisis, last week denied that the virus originated in Wuhan and slammed such claim as "irresponsible".

"The epidemic of the novel coronavirus pneumonia indeed took place in China, in Wuhan… but it does not mean its source is in Wuhan," said Dr. Zhong at a press conference.