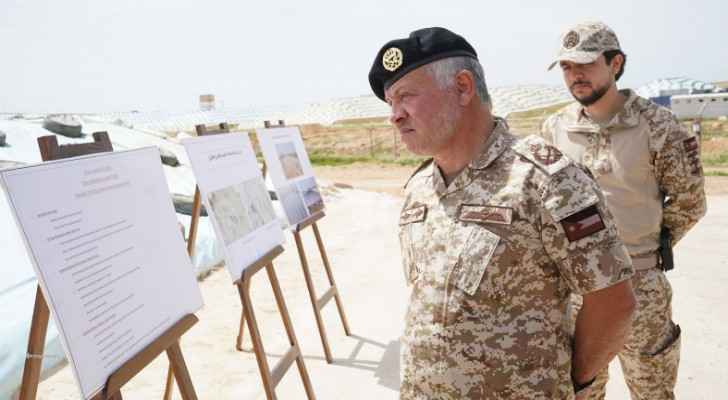 The visit is in line with King Abdullah’s concern to ensure covering citizens’ needs of basic commodities and maintaining national food security, especially during the exceptional circumstances caused by coronavirus disease (COVID-19).

During the visit, His Majesty stressed securing citizens’ needs of basic commodities as a priority at all times, noting that the goal is to have sufficient strategic stockpiles that last more than a year.

The King directed the concerned stakeholders to develop a plan to increase strategic food reserves by enhancing storage capacities and stepping up local production.

His Majesty was briefed by Minister of Trade, Industry, and Supply Tariq Hammouri on the features of the Ghabawi horizontal bunker silos, which help double the strategic reserves and maintain the quality of stored goods during various weather conditions.

The minister highlighted plans to expand the storage capacity of the silos to enhance food security.

According to the Ministry of Industry, Trade, and Supply, storage capacities around the Kingdom total around 1.1 million tonnes, and are expected to reach 1.45 million tonnes by the end of the year.

The Ghabawi silos were built jointly by the government, the Jordan Armed Forces-Arab Army, and the Royal Engineering Directorate of the Royal Hashemite Court.