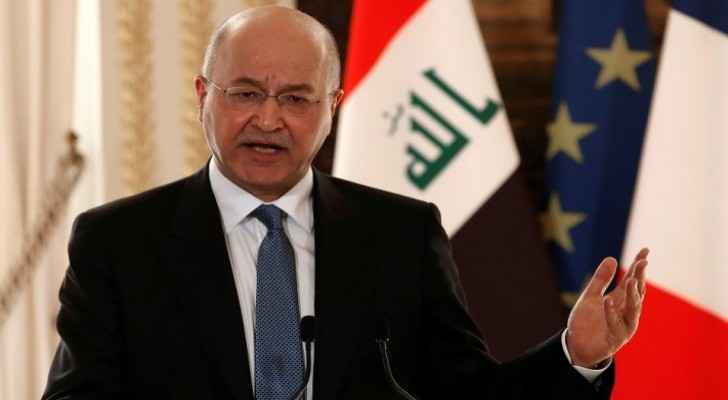 Iraqi President Barham SalihSalih has handed his resignation to parliament on Thursday, December 26, 2019, amid months-long protests that have gripped the country, The National reported.

He said that he would rather step down than pick a new prime minister rejected by demonstrators but as the constitution does not allow him to reject a nomination he would resign.

Parliament will now have to meet to discuss and vote on the resignation. If they endorse the move, Mr Salih will step down.

Parliament’s Binaa bloc on Wednesday nominated Assad Al Eidani, the governor of Basra and a former minister of youth and sports. The alliance is led by Iranian-backed politician Hadi Al Amiri.

He said he would prefer to resign than to nominate Al Eidani. In his letter, he pointed out that the constitution “binds the president to nominate the candidate of the largest bloc to form the cabinet, without the right of objection.”

Adding: “since my position about this current candidacy is considered unconstitutional, I, therefore, place my readiness to resign from the presidency in front of the members of parliament, so that they can decide based on their responsibilities as representatives of the people.”

Protesters in Baghdad blocked roads and bridges and in the south demonstrators torched several buildings overnight on Wednesday in response to the announcement of Mr Al Eidani's nomination.

Smoke and flames from burning tyres in Nasiriyah, Basra and Diwaniyah blocked major roads and bridges across the Euphrates all night.

In Nasiriyah, demonstrators set the provincial government building ablaze overnight for a second time since the protests began, and protesters also torched the new headquarters of a pro-Iran militia in Diwaniyah.

Since the start of October, tens of thousands of Iraqis have been on the streets demanding a change in leadership and a government that can tackle endemic corruption, unemployment and improve public services.

Over 450 demonstrators have been killed since the movement began, with security forces and Iran-backed Iraqi militias blamed for bloody crackdowns. More than 25,000 have been wounded.

Agriculture Minister submits his resignation to the Prime ....