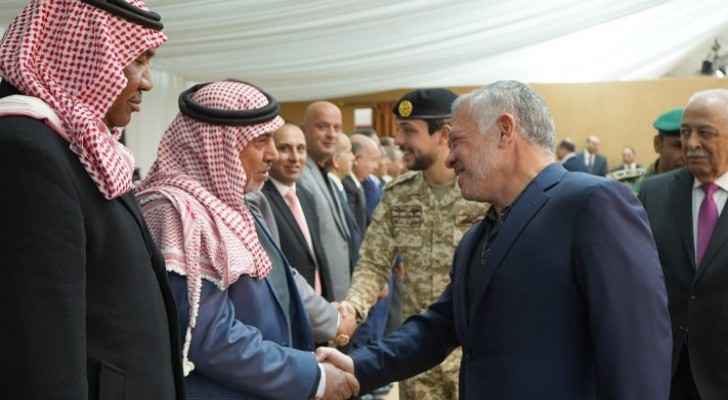 Speaking at the meeting, King Abdullah welcomed the dignitaries and representatives of the Amman-based Balqa tribes, expressing pride to be among fellow Jordanians, many of whom were brothers in arms in the Jordan Armed Forces-Arab Army and security agencies.

During the meeting, attended by Prime Minister Omar Razzaz, His Majesty stressed that the aim of the economic programme implemented by the government is improving the standard of living for citizens, pointing out the need to provide employment opportunities for youth.

For their part, the tribal leaders commended the King’s efforts and directives to improve citizen’s standards of living, expressing appreciation for His Majesty’s outreach to the people to hear their concerns.

Stressing their commitment to safeguarding the nation’s achievements, the attendees praised the King’s efforts in defence of Arab and Islamic causes, foremost of which is the Palestinian cause, noting the importance of the Hashemite Custodianship of Islamic and Christian holy sites in Jerusalem.

They lauded His Majesty’s decision to terminate the Peace Treaty annexes on Baqura and Al Ghamr and reaffirm Jordanian sovereignty over them.

Also speaking at the meeting, Prime Minister Razzaz said the government, upon Royal directives, will reach out to local communities through field visits with the aim of addressing the concerns related to development needs, education, healthcare, and other services expressed by the tribal leaders on Monday.

Road accident leaves one killed, another injured in Balqa

Road accident leaves one killed, another ....