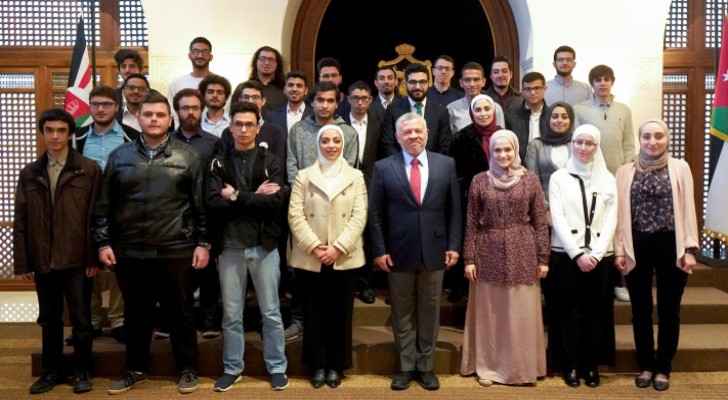 His Majesty King Abdullah met on Sunday at Al Husseiniya Palace with a group of students from public and private universities who achieved outstanding results in two international programming competitions.

During the meeting, King Abdullah expressed his pride in the students’ success, not only locally but also internationally, affirming his support for participants in both competitions to excel further.

His Majesty directed the relevant entities to study establishing specialized labs in the northern, central, and southern regions of Jordan, fitted with the necessary equipment to enable youth to hone their skills when participating in such competitions.

Some of the students have participated in the IEEExtreme Programming Competition, organized by the Institute of Electrical and Electronics Engineers.

The competition saw the participation of 9,500 students from over 75 countries, who were challenged to solve a range of programming problems within 24 hours in teams. Eleven of Jordan’s participating teams were placed among the top 100 in the international contest, with two among the top ten, coming fourth and sixth.

Established in 1977, ICPC is one of the oldest and most prestigious global programming competitions, with 50,000 contestants from over 3,000 universities from 111 countries participating this year. Participants were given eight to fourteen problems to be solved within five hours.

The Jordanian teams competing at the Arab and African levels were placed first and second, qualifying to compete in the ICPC in Moscow next year.

Mohammad Abu Aboud, a student at Princess Sumaya University for Technology and a member of the Aurora team, briefed His Majesty on ACPC.

Abu Aboud noted the team came in first place at the MENA level in ICPC 2018 in China. The team also came in first place in the ACPC in Egypt this year, which saw the participation of 120 teams from 60 universities from 11 Arab and African countries.

Obada Al Abbadi, a student at the University of Jordan, gave a briefing on the Jordanian participation in IEEExtreme Programming Competition. Participating teams from Jordan came in first place regionally and fourth internationally in the 13th edition of IEEExtreme, he said, noting that Jordanian teams won first place throughout the past five years.