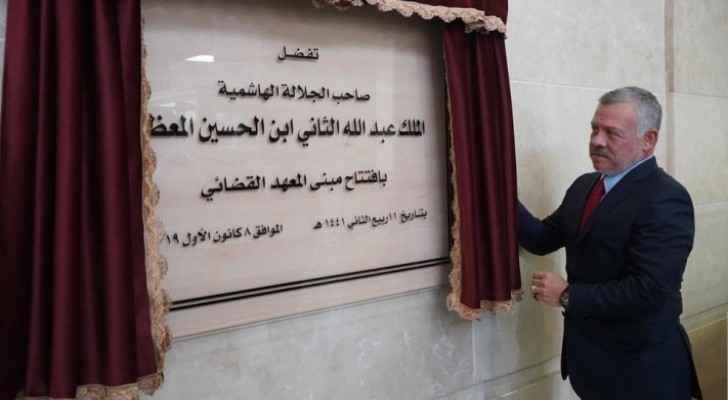 His Majesty King Abdullah on Sunday inaugurated the new premises of the Judicial Institute of Jordan, which aims to build judicial capacities and qualify judges through diploma programs as well as specialized training programs.

His Majesty noted the accomplishments of the judiciary, emphasizing the need to build on progress and to continue implementing the recommendations of the Royal Committee to Develop the Judiciary and Enhance the Rule of Law to further improve performance.

The King highlighted the need to expedite litigation without compromising fairness and quality, stressing the need to streamline legal procedures for citizens.

His Majesty also underscored the important role of the judiciary in safeguarding Jordan’s economy and investment-friendly environment, noting the need to continue to enhance the performance of judges and specialized courtrooms.

During a tour of the new premises of the Judicial Institute of Jordan, which was financed through a grant from the European Union, the King was briefed by its director, Judge Ihsan Barakat, on the programs and training courses offered.

To date, 825 students have graduated with a diploma from the Judicial Institute of Jordan since its establishment in 1988.

The institute, through its diploma program and training courses, has qualified a number of judges and legal administrative staff from various Arab countries, including Oman, Yemen, Kuwait, Iraq, and Saudi Arabia.

During the visit, His Majesty observed a moot court hearing and met with a number of trainees, as well as a number of Jordanian and Kuwaiti participants in a course for military judges held in coordination with the Jordan Armed Forces-Arab Army.

Moreover, the King attended part of a workshop conducted remotely with the Palace of Justice in Irbid through e-learning technology, as well as a panel discussion that included participants from the Future Judges Programme, institute alumni and current students.

During the session, His Majesty expressed support for the students, stressing the importance of empowering them and enhancing the work of the judiciary.

His Majesty directs officials to consider ....

His Majesty directs officials to consider ....

His Majesty directs officials to ....