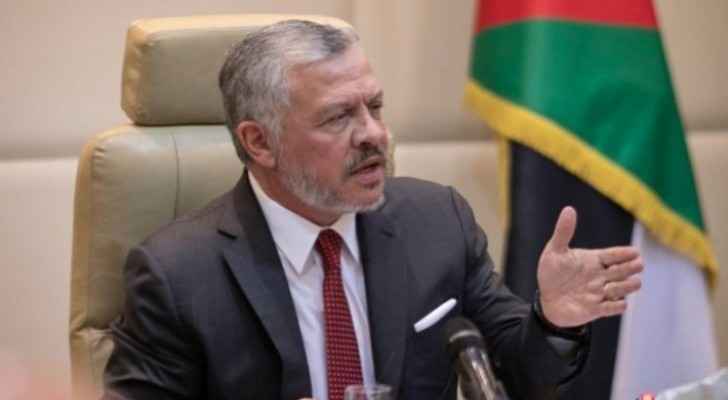 His Majesty King Abdullah II, in the presence of His Highness Crown Prince Hussein bin Abdullah II, received the 2019 annual report on the work of the judiciary, on Monday.

During the meeting at Al-Husseiniya Palace, His Majesty, expressed his pride in the achievements of the judiciary to Judicial Council President, Mohammad Al-Ghazo, stressing that the integrity and development of the judiciary are essential for every citizen, sector and investor.

His Majesty the King affirmed his full support for the judicial authority, stressing the need to take the most stringent legal measures in order to protect society from the occurrence or recurrence of crimes.

In turn, Al-Ghazo, told His Majesty about the most prominent achievements dealt with in the report, which are the high rate of solving cases, the decrease in the percentage of complaints, the development of specialization in judicial work, the use of modern technology and the focus on training programs for judges.

In addition, he spoke about amending legislation to improve performance, and appointing trainee judges from among the graduates of the Judicial Institute of Jordan.

He also pointed out the challenges that hinder the work of the judiciary, and the proposed solutions to confront them within the ongoing process of developing the required apparatus.

According to the report, the specialized criminal chambers of the courts and the Public Prosecution office have been activated to hear cases related to economic crimes, money laundering, cybercrime and human trafficking.

In addition, a public prosecutor has been appointed to look into cases related to firing bullets and carrying unlicensed weapons. Also, the use of closed circuit television (CCTV) has been activated in juvenile courts.

The report indicated that the courts solved 85% of the cases in 2019, the rate of litigation times decreased, and the percentage of judges participating in specialized training programs increased by about 15%.

The report also mentioned the amendments made to laws to affix tax and customs public prosecution to regular public prosecution, the use of remote trial technology in criminal trials between a number of courts, correctional centers and rehabilitation centers, and an increase in the percentage of societal penalties by 5%.

The meeting was attended by the Chief of the Royal Hashemite Court and the Adviser to His Majesty for Policies.