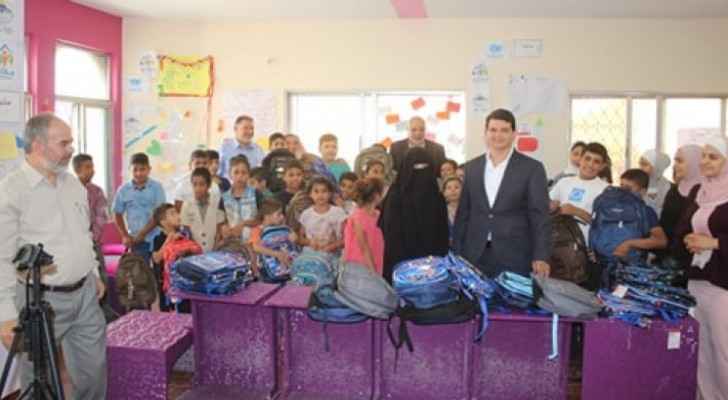 A Jordanian bride and groom have donated all their wedding costs to orphans and needy of the Islamic Charity Center Society.

The couple, Mohamed Anwar Asaad and Dania Riad, have given 600 school backpacks with stationery, worth JD 6,000 to orphans and needy in six of the Society's centers in order to bring joy and pleasure to their hearts, as the new school year is ahead.

Under the supervision of the Director General of the Social Welfare Department, Abdul Wader Kafaween, the couple have donated the schoolbags and stationery to orphans and needy of the Society's six centers in Talbieh, Dhiban, Al Qaser, Faqqu' southern Mazar in Madaba and Karak

President of the Society, Jamil Al-Dheisat considered this donation as a precious charitable initiative, launched by the couple to promote the spirit of giving in the society.

Dheisat added that this initiative shows the sense of solidarity that the Islamic Charity Center Society strives to consecrate and consolidate in the community.

He further added that social responsibility is not a concept limited to institutions and companies, but it also may extend to individuals, where they can give donations to orphans and people in need in a way that would express their sense of responsibility towards the country and society.

Dheisat expressed gratitude to the couple, wishing them a successful marriage.