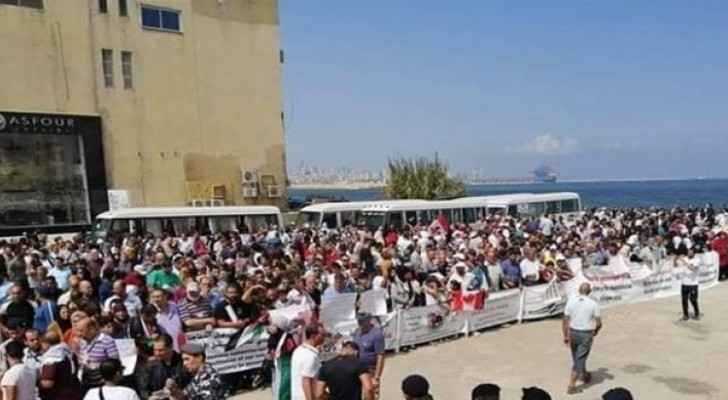 Hundreds of Palestinian refugees gathered in front of the Canadian Embassy on Wednesday, August 7, 2019, decrying their situation in Lebanon and requesting asylum in the North American nation, the Daily Star reported.

Lebanese media outlets reported that around 700 people gathered at the Embassy in Jal al-Dib calling for asylum in Canada, flying Palestinian and Canadian flags.

The demonstration was organized by the Palestinian Youth Organization for Humanitarian Relief in Lebanon and the Youth Movement for Palestinians in Syria.

Fathi Najjar, a representative of the former organization said that both groups had handed letters to an embassy representative "explaining the suffering of Palestinians in Lebanon and the need for asylum in Canada."

They also submitted lists of names of Palestinians residing in Lebanon that are requesting to be granted asylum in Canada.

The Canadian Embassy didn’t immediately respond to a request for comment on the protesters' calls.

Najjar said the action was in part prompted by a recent Labor Ministry crackdown on undocumented foreign labor.

Lebanon's Palestinian refugees have been holding protests for the last four weeks against the campaign, feeling it feel targets them unfairly.

Unlike other foreign workers, Palestinians cannot return to their homeland and often lack the documents required to get a work permit.

In addition, Najjar said that the group was also protesting against alleged corruption within the United Nations agency for Palestinian refugees, UNRWA, which he said handed out support and aid in a biased manner. "[UNRWA] is not helping people," he said.