Report: 9,000 Jordanians die yearly as a result of diseases caused by smoking

Report: 9,000 Jordanians die yearly as a result of diseases caused by smoking 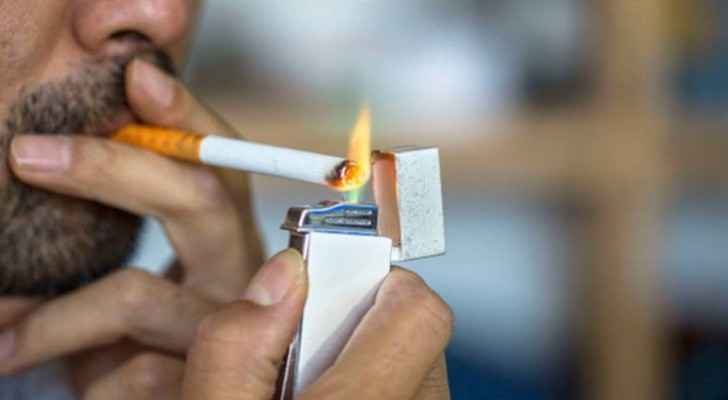 The National Committee for Combating Smoking and Tobacco held its first meeting on Monday, June 17, 2019, to discuss indicators and figures related to smoking in Jordan and prepare an action plan accordingly.

The meeting was chaired by Prime Minister Omar Razzaz, the Committee's chairman, in the presence of Princess Dina Mired, the Committee's observer member, member ministers of the Committee, World Health Organization (WHO) representatives and relevant stakeholders.

"The committee will address, with all responsibility, this dangerous phenomenon, and its negative and destructive impact on our society, especially the youth," PM Razzaz said.

Razzaz added that indicators and figures related to smoking in Jordan is frightening, as Jordan is among the highest in the world in the number of smokers.

Statistics also indicate that 9,000 people die every year in Jordan as a result of smoke-related diseases, while the total amount spent on smoking is about JD1.6 billion or about 6 % of the Gross Domestic Product (GDP) compared with the global rate of about 1.8 %.

The prime minister stressed that "We shouldn't stand still on this issue, which has a very serious impact on the health and future of next generations," noting that the committee will develop a work program and procedures according to a timetable to mitigate it.

Razzaz pointed to the importance of raising awareness and immunity measures so that young people at an early age would realize the dangers of smoking and its addiction, especially that quitting smoking is more difficult than starting its addiction.

The committee stressed the need to fully enforce the Public Health Law to prevent smoking in public and closed areas, starting with ministries, public institutions, schools and universities and prohibit the sale of tobacco to children under legal consequences, in addition to a series of government measures and policies on protection, awareness and strengthen the role of clinics that encourage quitting smoking.

Princess Dina Mired warned of the danger of smoking in Jordan on the health of Jordanians and young people in particular, noting she has followed up closely during her time as Director General of the King Hussein Cancer Center over the past years on the high treatment bill for cancer caused by smoking as well as other diseases such as heart and arteries and diabetes.

She expressed her confidence that the committee will have a positive effect in saving the lives of hundreds of thousands of Jordanian youth. She also thanked the Prime Minister for prioritizing this issue, especially since 70 % of men and 45 % of youth in Jordan are addicted to smoking.

She said the committee will work in a comprehensive and scientifically studied way to protect young people and children from the dangers of smoking, and ensure that the door will be shut in front of smoking companies to carry out their propaganda and marketing programs for youth and children.

Representative of the WHO office in Amman briefed the committee on the phenomenon of smoking in Jordan, stressing that the smoking index in most countries and regions of the world, except for the Arab region, is witnessing an increase in the numbers and percentage of smokers, pointing out that the cost of treating diseases caused by smoking in Jordan reaches about JD200 million annually.

JFDA, IOI seize tons of shisha molasses which was ....