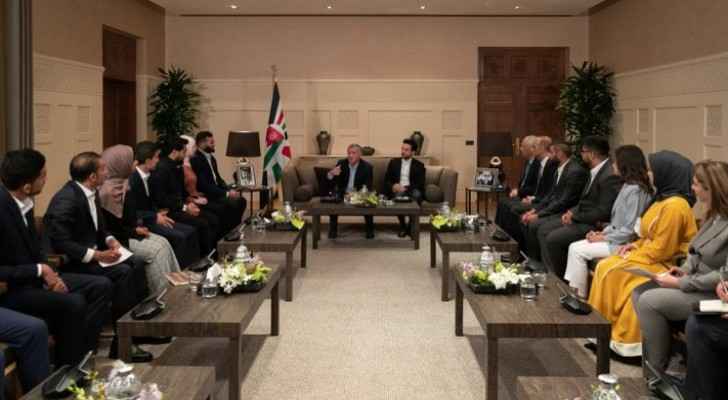 His Majesty King Abdullah, during a meeting on Sunday evening with a group of young Jordanians at Al Husseiniya Palace, stressed the need to adopt youth’s ideas and to encourage their political engagement, noting that young Jordanians must realise that their voice is heard and has an impact.

His Majesty listened to the young Jordanians’ success stories in various initiatives, as well as their ideas to encourage political engagement among youth and develop partisan and parliamentary work, as they noted the importance of the King’s discussion papers in this regard.

The young Jordanians also highlighted their initiatives in youth and political work, as well as interfaith harmony, volunteerism, training and empowering their peers, and countering extremism.

His Majesty called for benefiting from young people’s ideas and suggestions in development, overcoming economic challenges, and reducing poverty and unemployment.

The King noted young Jordanians’ important role in modernization, pointing to their many success stories in leading entrepreneurial, voluntary, and development-oriented projects.

The young Jordanians at the meeting said the government cannot be seen as the main employer, underscoring the importance of entrepreneurship and access to financing facilities for start-up projects, and calling for shunning the culture of shame.

They said universities should encourage youth to have a greater role in political life, calling for matching education output with labor market needs.

Highlighting the need to promote tourism, the youth said Jordan has a history of achievements in various fields that must be celebrated, pointing to the importance of a strong media sector that unifies the internal front and highlights these achievements.

The young Jordanians called for upholding the rule of law and developing decentralization to increase public engagement in decision- and policy- making.

Warning of the harmful impact of rumors on society, they called for enhancing direct communication between officials and the public.

The young attendees expressed support for His Majesty’s position on the Palestinian cause and Jerusalem and supporting the Palestinian people in seeking their legitimate rights.

Royal Hashemite Court Chief Yousef Issawi and Adviser to His Majesty for Communication and Coordination Bisher Khasawneh attended the meeting.