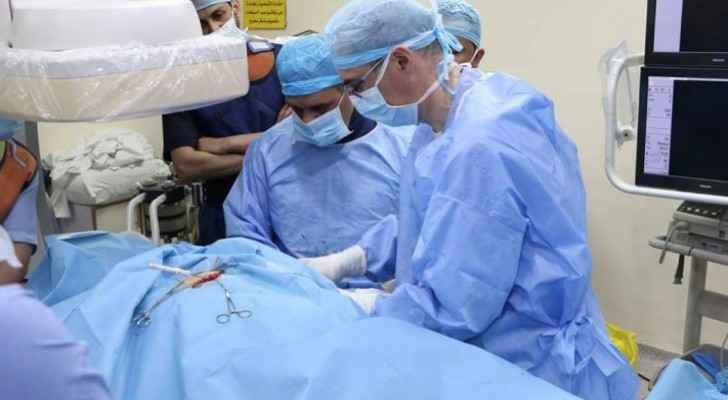 Another outstanding achievement was added to the long list of achievements of the Jordan University Hospital, which is the recent implantation of a defibrillator (S-ICD Subcutaneous Boston Scientific) for a 40-year-old patient.

Under medical supervision of the Cardiac Team, consisting of Dr. Munir Al Zaqa, Internal Medicine and Heart Arrhythmias consultant, Dr. Akram Al-Saleh Head of Cardiology Department at the hospital, Dr. Hanna Makhamrah, a cardiologist, as well as the Head of Cardiac Catheterization Department, Nurse Tahir Batah with the participation of specialized nurses and radiology staff.

Dr. Zaqa said that the patient was suffering from hypertrophy of the heart muscle, dysfunction in the electricity of the heart, and dangerous acceleration that would cause a sudden stop of the heart leading to death.

The patient reached the Hospital's emergency rooms semi-conscious with a very rapid ventricular acceleration which called for an immediate surgical procedure to install and implant a subcutaneous defibrillator device that gives a shock directly when the heart repeatedly accelerates and stops.

The defibrillator was planted by making a minor incision on the left side of the armpit as opposed to the normal device previously used that was implanted in the shoulder area.

This is considered an achievement of the Jordan University Hospital as the first hospital across the Kingdom that conducts this surgery by using this device on both the public and private sectors.

Zaqa added that the most prominent features of this device, which is changed after about 7-10 years, based on a yearly periodic examination, are the lack of complications after the surgery such as inflammation or the possibility of making a hole inside the heart, in addition to the reduction of the surgery's duration to less than an hour, and the reduction of the period during which the patient will stay in the hospital after the operation, as the patient left the hospital after less than 24 hours.

Moreover, the defibrillator has its aesthetic as it was hidden under the armpit without being shown.