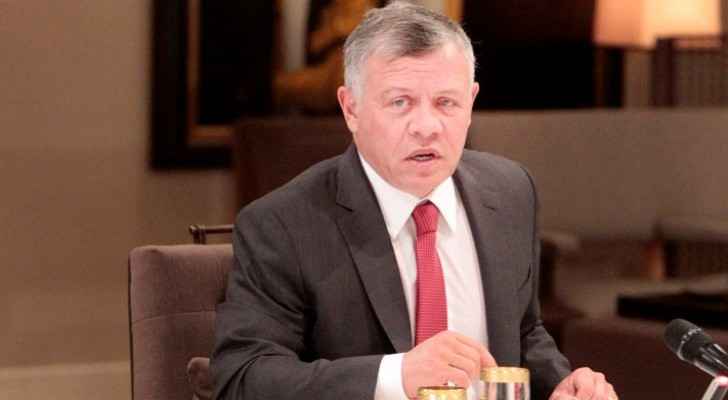 His Majesty King Abdullah II met on Thursday, April 4, 2019, with a delegation from the British Royal College for Defence Studies (RCDS), which included officers from several countries.

The meeting, which was held at the Al Husseiniya Palace, dealt with the peace process, as His Majesty stressed the necessity of ending the Palestinian conflict with the Israeli occupation on the basis of the two-state solution and ensuring the establishment of an independent Palestinian state with East Jerusalem as its capital.

King Abdullah stressed the need to preserve the status quo in Jerusalem as the key of achieving peace in the region, emphasizing that Jordan will continue playing its historic and religious role in protecting Islamic and Christian holy sites in Jerusalem.

The meeting also tackled crises in the region along with regional and international efforts in the fight against terrorism as part of a comprehensive strategy.

The meeting was attended by His Royal Highness Prince Faisal Bin Al Hussein, Advisor to His Majesty the King and Director of His Majesty's Office.

The Royal College of Defence Studies (RCDS) is the senior college of the Defence Academy of the United Kingdom.

"RCDS provides the capstone to the strategic education of those officers of the Armed Forces and equivalent civil servants who have the potential to reach the highest ranks and who must therefore understand and be comfortable working at the strategic level in a cross-government and international environment. The College was established in 1927, originally as the Imperial Defence College, in accordance with Winston Churchill's vision of promoting greater understanding between senior military officers, diplomats, civil servants, and officials," according to the RCDS official website.

King receives US House of ....