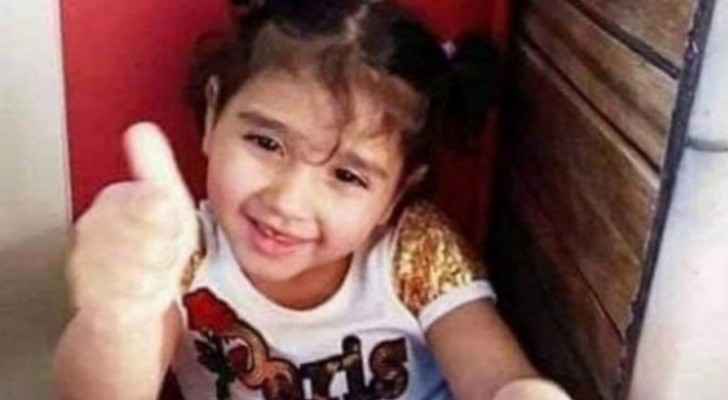 After the missing three-year-old Nibal Abu Dieh was found dead in a warehouse in a building in Zarqa governorate, a spokesman for the Public Security Directorate (PSD) confirmed on Sunday, March 31, 2019, that investigation teams were able to identify the killer and arrest him after he confessed to the crime.

Media spokesman for the PSD said that the investigation into the incident was opened last Wednesday when Nibal's parents informed a security center in Zarqa that their daughter was lost and accordingly, an investigation team has been formed.

The media spokesman stated that investigation teams were able to find the dead body of the young girl using sniffer dogs.

The body was found covered with scraps and was later referred to the forensics as there had been some signs of head injuries.

The forensic medical committee revealed that the death was caused by brain damage and hemorrhage resulting from skull fractures.

Upon investigation, the suspect was found to be a 17-year-old juvenile, living next to the victim's home, where the body of the girl was found.

During the investigation, the suspect confessed that the girl accompanied her mother to the suspect's house and then the girl left to a place near the warehouse, which called him to follow her in order to sexually assault her.

The victim then started screaming, which lead the suspect to hit her several times on the head using a sharp object until she died. He then placed scraps on top of the dead body.

The case was handed over to the prosecutor who decided to arrest the perpetrator, who was charged with murder, the media spokesman added.

The media spokesman pointed out that some people who were present at the scene yesterday night have carried out riots and tried to burn the warehouse, where the body was found, and threw stones at the security forces, wounding two citizens, one of them is currently suffering from a fractured skull, which forced the security forces to use tear gas.

The media spokesman also called for the need to stay away from spreading rumors or carrying out negative practices and circulating them on social media platforms when such incidents occur because they have a negative and disruptive effect on the work of the security services, which might also insult the victim and her family.