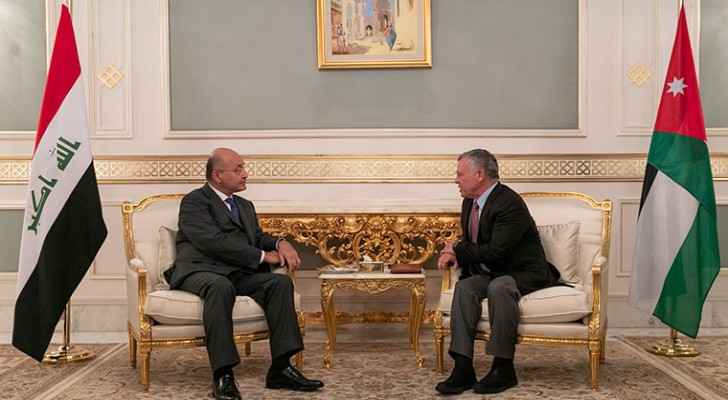 At the meeting, held in Tunis ahead of the 30th Arab Summit, the two sides stressed the importance of maintaining coordination on issues of mutual concern.

The two leaders called for building on the trilateral summit between Jordan, Egypt, and Iraq, which was held last week to enhance ties between the three countries in service of their shared interests and the interests of the wider Arab nation.

His Majesty affirmed that Jordan stands with Iraq as it seeks to fulfil the aspirations of its people towards further prosperity and progress.

Discussions at the meeting, attended by senior officials on both sides, covered a number of regional challenges and issues, foremost of which is the Palestinian cause and reaching just and lasting peace between the Palestinians and the Israelis on the basis of the two-state solution and the Arab Peace Initiative, guaranteeing the establishment of an independent Palestinian state with East Jerusalem as its capital.

The need to reach political solutions to regional crises was also stressed, as well as efforts to counter terrorism within a holistic approach.