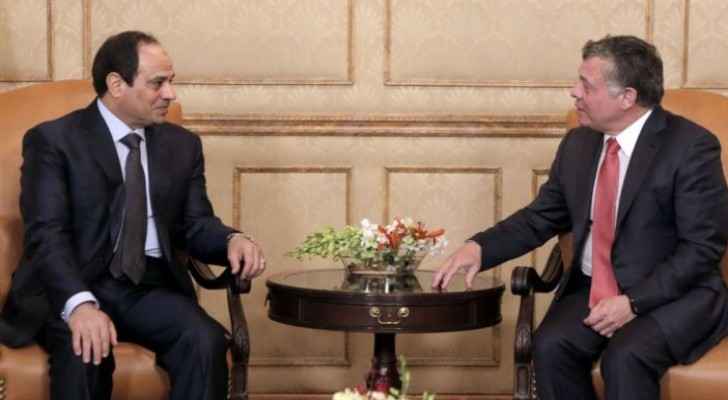 During his visit to Egypt on Sunday, March 24, 2019, His Majesty King Abdullah II held talks with the Egyptian President Abdel Fattah El Sisi on the strong brotherly relations between Jordan and Egypt and developments in the region.

During the talks held at the Federal Palace in Cairo and preceded the tripartite summit between His Majesty, President Sisi, and the Iraqi Prime Minister Adil Abdul-Mahdi, King Abdullah and Sisi affirmed their pride in the distinguished level of Jordan-Egypt relations and the keenness to upgrade them in all fields.

The importance of expanding joint cooperation, particularly in the economic and investment fields, and the continuation of coordination and consultation on various issues, in a way that serves the interests of the two countries and serves Arab issues, were stressed.

His Majesty and President Sisi emphasized the importance of supporting the joint Arab action and uniting positions towards the various challenges facing the Arab nation.

On the Palestinian issue and Jerusalem, King Abdullah and Sisi stressed the need to intensify efforts to support Palestinian brothers in their efforts to achieve their legitimate rights to establish an independent Palestinian state with East Jerusalem as its capital based on the two-state solution and the Arab peace initiative.

His Majesty also noted to the need to stop the Israeli escalation in Jerusalem and the violations against Al Aqsa Mosque.

Regarding the developments related to the Syrian crisis, the meeting discussed the importance of intensifying efforts to reach a political solution that preserves Syria's territorial integrity and people.

A number of crises in the region and efforts to reach political solutions were also discussed, in addition to regional and international efforts in the war on terror within a comprehensive strategy.

Upon his arrival at the Federal Palace, King Abdullah received an official reception ceremony, where the Jordanian and Egyptian national anthems were played.