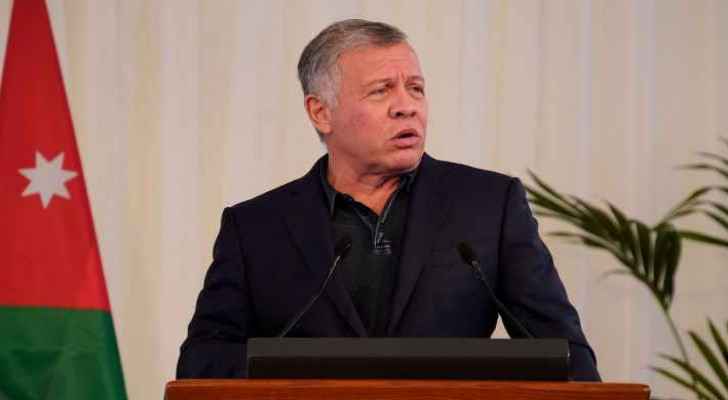 His Majesty King Abdullah II delivered a speech during his visit to Zarqa governorate on Wednesday, March 20, 2019, and met with representatives of the governorate.

"No one can put pressure on Jordan regarding this issue. The answer will be NO, because all Jordanians stand with me in one line regarding Jerusalem, and in the end, all Arabs and Muslims will stand next to us."

"For me, Jerusalem is a redline," His Majesty said, adding that as a Hashemite Jordanian state, we have a duty to protect Islamic and Christian holy sites in Jerusalem.

During his visit, King Abdullah discussed efforts exerted by Jordan to promote joint Arab positions on various challenges facing the Arab Nation and its efforts in promoting Arab economic cooperation.

His Majesty also expressed his pride in the people of Zarqa governorate and his happiness in his presence among them to follow on their demands and needs.

"I have served years in the Armed Forces in Zarqa and I am familiar with many of their challenges," King Abdullah added.

"Zarqa is an important industrial city, where more than 50% of the capital of national industries is located," His Majesty said," stressing that the need to attract more investments to Zarqa to provide employment opportunities for youth.

King Abdullah pointed out that the London Initiative Conference is a new economic development portal, which requires work to set priorities to attract Arab and foreign investors to make investments in the Kingdom, especially in Zarqa.

King Abdullah also stressed on the importance of the private sector's participation in the identification of these priorities.

His Majesty also addressed the environmental challenges facing Zarqa, stressing that "the issue of environmental pollution is never acceptable."

His Majesty directed the Jordanian government to form a team to visit all areas where there is pollution and to find solutions to this problem as soon as possible.

"On the issue of the phosphate in Jordan, the government should begin to prepare a comprehensive plan for the region, which would positively reflect its results," King Abdullah stated.

Regarding the challenges facing the Education sector, King Abdullah said, "I am aware that more than a third of the schools operate on the double-shifting system, which affects students and teachers. A large part of the allocations for decentralization will be directed to building new schools and solving the problem of rented buildings.

In order to improve the level of health services in Zarqa, His Majesty said, "there would be coordination between the government and the Royal Medical Services in this regard."

His Majesty said that the government is responsible for finding solutions to the challenges, which requires a government team to visit Zarqa to discuss and determine development priorities in the governorate.

"There are things that we can cooperate with you through the Royal Hashemite Court, King Abdullah said, emphasizing that a team from the Royal Court will visit Zarqa next week and to launch a number of initiatives.