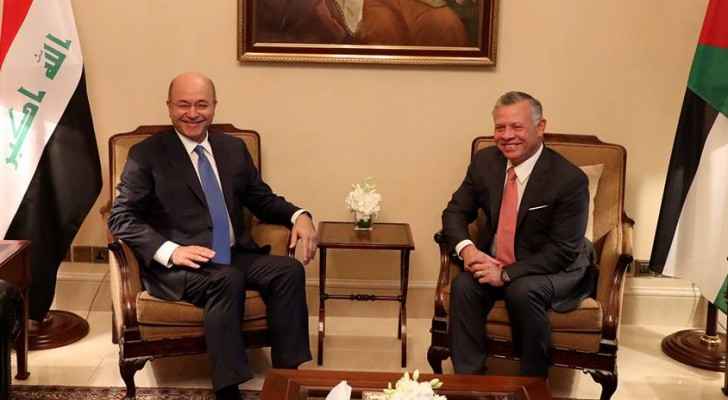 The Iraqi President, who arrived ealier on the same day to Marka Military Airport, discussed cooperation between Jordan and Iraq in various fields, especially economic, trade, investment, energy and transport.

Attended by senior officials from the two countries, His Majesty the King and Iraqi President stressed the need to proceed with the implementation of a number of joint economic projects, especially the pipeline connecting the Iraqi city of Basra to the port of Aqaba, as well as on the rehabilitation of the road connecting Amman to Baghdad.

The Iraqi president stressed the importance of establishing more of these joint projects, stressing that the implementation of the pipeline project is a strategic one. He called on companies to take advantage of investment opportunities in Iraq.

The King stressed the necessity of creating conditions that would increase bilateral trade between the two countries, facilitating the entry of Jordanian products into the Iraqi market and the importance of exchanging visits between officials in the private sector in order to boost the trade.

The discussion also adressed the deeply-rooted ties between Jordan and Iraq, stressing the need to continue on coordinating and co-consultating between the two countries on issues of common concern.

His Majesty the King congratulated President Barham Saleh on the confidence of the Iraqi Council of Representatives by electing him as President of the Republic and on the success of his political campaign in Iraq. His Majesty affirmed Jordan's stand by Iraq in its efforts aimed at preserving its unity and stability and wished Iraqi people  further progress and prosperity.

King Abdullah also praised Iraq's efforts in countering terrorism, stressing on the importance of mututal work in confronting it and on promoting further tolerance between religions.

The meeting also touched upon the Syrian crisis and the need to reach a political solution, one which preserves Syria's territorial integrity and safety of its citizens.

The Iraqi President also stressed his country's keenness to strengthen cooperation with Jordan, praising His Majesty's efforts in supporting Iraq in enhancing its security, stability and prosperity, and standing wstrong in fighting terrorism and confronting it.

Salih congratulated His Majesty on receiving the Templeton Award for 2018, in recognition of His Majesty's efforts in achieving interfaith harmony, protecting Islamic and Christian holy sites in Jerusalem, and protecting religious freedoms.

The Iraqi delegation included Iraqi Minister of Foreign Affairs, Minister of Industry, head of the Intelligence Service, Iraqi Ambassador to Amman, in addition to a number of Iraqi officials.