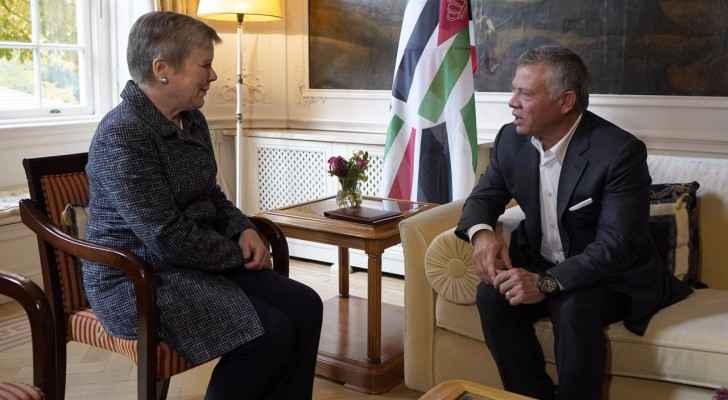 His Majesty King Abdullah II participated in the "Aqaba Meetings" held in the Hague to discuss and coordinate international efforts in the war on terror, on Monday, November 5, 2018.

The meeting, hosted by the Netherlands in partnership with Jordan, focused on international efforts to combat extremism and terrorism, particularly in Europe.

Attending with his Majesty is HRH Prince Hashim bin Hussein, HRH Prince Ghazi bin Muhammad, the King's top advisor for religious and cultural affairs, Minister of Foreign Affairs and Expatriate Affairs, and His Majesty’s Advisor, Director of His Majesty's Office.

The meeting was also attended by ministers, political and security officials from several European countries as well as officials from the United Nations, the European Union, the North Atlantic Treaty Organization (NATO), the United States, Canada, Australia and other international partners.

On the sidelines of the meetings, His Majesty the King held separate meetings with a number of heads of delegations.

During the meetings, areas of joint cooperations were reviewed and the efforts to fight terrorism as part of a comprehensive strategy, in addition to a number of regional issues.

The Netherlands is the second country to host the Aqaba Meetings, after being hosted in Albania last June.

The Aqaba Meetings, launched by His Majesty King Abdullah II in 2015, aims at enhancing security and military coordination and cooperation and exchanging experiences and information between regional and international parties to combat terrorism in a holistic approach.

In previous years, the Aqaba meetings included a series of meetings with the heads and officials of a number of countries from East and West Africa, South-East Asia and the Balkans, as well as senior officials from around the world.