The turbine had a capacity of generating 0.225 MW of energy. (Roya) 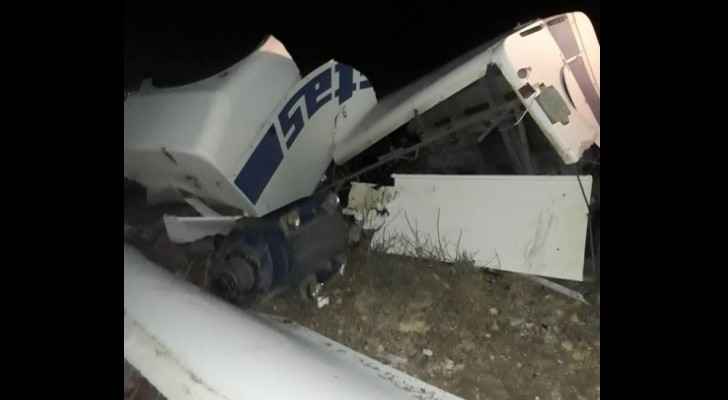 A Civil Defence Department (CDD) team and security services in Irbid have previously evacuated one of the schools and a number of houses in Al Mazar District in Irbid as a precautionary measure, after wind speeds reached great highs and the CDD feared that they would cause one of the nearby wind turbines to fall down.

Their fears were confirmed late last night, when a large propeller (wind turbine) in the Hofa Wind Farm fell down late on Sunday, October 28, 2018, Roya’s Irbid-based reporter has said. One of the area's residents told Roya that one out of five propellers - with a capacity of generating 0.225 MW of energy each - has been disabled for almost a year due to the bad weather conditions.

He noted that extreme wind speeds have led to the irregular and forceful movement of the propeller, which in turn caused the main shaft to crack in several places, making it clear that the propeller could fall at any given moment and cause serious damage to the surrounding homes.

MP Yousef Al-Jarrah told Roya that a school in Hofa was evacuated from students and a number of people were evacuated from their homes in order to save their lives.

Jarrah confirmed that he contacted the Central Electricity Generating Corporation (CEGCO) to repair the malfunction, however, the CEGCO has not returned his calls.

Razzaz: Our focus is on stimulating economic growth and ....

Razzaz: Our focus is on stimulating ....