Officials from around the world condoling Jordan

Officials from around the world condoling Jordan 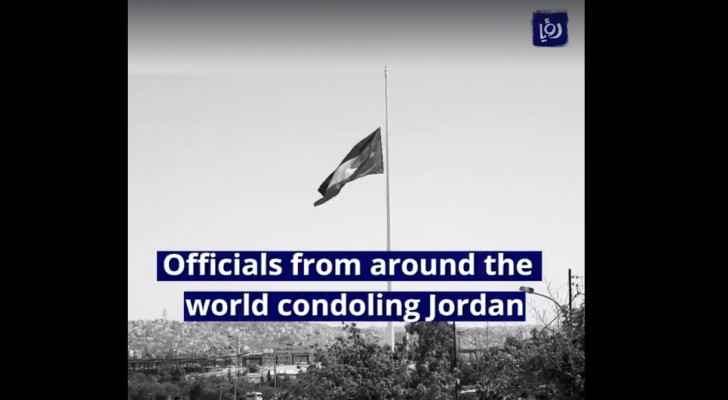 Officials from all around the world expressed grief over the deadly floods that visited Jordan on Thursday, October 25, 2018 and resulted in 21 deaths and tens of injuries, most of them were of 7th and 8th graders who were out visiting an area near the Dead Sea as part of a school trip.

Statements included support and wishes of speedy recovery to the injured. Many officials have tweeted their shared thoughts with Jordan and the Jordanians;

"My deep condolences to the many victims of the floods in the Dead Sea - my thoughts are with the families. My thanks to the Civil Defense."

"The Union Jack at the Embassy is flying at half-mast today alongside Jordanian flags in solidarity & sadness with our Jordanian friends & colleagues in memory of all the children, their teachers & any other victims, who so sadly died in today’s Dead Sea Tragedy."

"Our thoughts are with those who have been injured and families of those who have died after horrible flash floods near DeadSea. We stand together with the people of Jordan and wish courage and strength to the rescue services."

"We offer our deepest condolences to the parents of the deceased children and wish the injured a speedy recovery of this unfortunate incident in the DeadSea. The Netherlands Embassy stands with Jordan in this harsh time."

"The UN family in Jordan is deeply saddened by the loss of life that was caused by the flash flooding in the Dead Sea area. We convey our deepest condolences to the families of the victims & to the Government of Jordan."

"Saddened by the tragic loss of human lives in Jordan as a consequence of flash floods at the DeadSea. Our heartfelt condolences to families affected by the floods and people of Jordan.

“I feel an immense sadness tonight at the news of the terrible mounting death toll at the Dead Sea after today's flash flood. My thoughts and deepest condolences go to the families of the victims. I also salute the efforts of the rescuers from Civil Defence.”

"We are mourning with Jordan loss of its children in the tragic flash floods at the DeadSea In the name of people of Slovakia heartfelt condolences to families."

"My heart aches for the many victims of the floods in the Dead Sea area and my sympathy goes to their bereaved families and friends. Admirative of the rescuers from Civil Defence."

"Terribly sad to hear of the horrible tragedy of the loss of 18 Jordanians (mostly children) who were swept away by a flood while touring near the Dead Sea. Our thoughts & prayers are with their families & loved ones. I also pray for the speedy recovery of those who were injured."

Canada
Embassy of Canada to Jordan

"The embassy of Canada extends its heartfelt condolences to the families of those who lost their lives in the tragic flash floods at the Dead Sea."