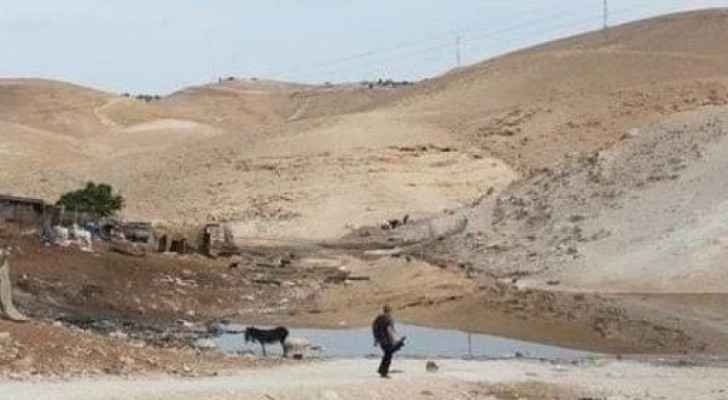 Tens of settlers expressed their fury while carrying wastewater to the village, as Israeli authorities delayed (again) the evacuation of Palestinians residing in Khan A-Ahmar.

In May 2018, the Supreme Court in Israel approved the demolition of Khan Al-Ahmar, as it is considered part of Area C and falls under Israeli control of the occupied West Bank.

Israel considers the village as illegally-built without a construction permit. Accordingly, residents of the village were given a deadline to evacuate their homes before demolition would take place.

Khan Al-Ahmar has witnessed a 100-day protest where people expressed their refusal of the evacution decision, Secretary-General of the Fatah Movement, Daoud Jahalin, emphasized.

“We call on everyone to move towards Khan Al-Ahmar to help its residents to thwart the occupation’s intention,” Jahalin added.

As a result, Palestinian Prime Minister, Rami Hamdallah, urged the international community to interfere and prevent Israel from demolishing Khan Al-Ahmar, which if executed, would leave hundreds of its residents without shelter.

During his meeting with the new head of the German Representative Office in Ramallah, Christian Glages, on Wednesday October 3, 2018, Hamdallah appealed to Germany in order to support the Palestinian protestors in their cause and pressure the Israeli authority to withdraw the demolition plan.

German Chancellor, Angela Merkel, is expected to visit Israel and meet with various senior officials. According to WAFA news Agency, Merkel has threatened to cancel her visit if Israel demolishes the village.