still footage from the security camera 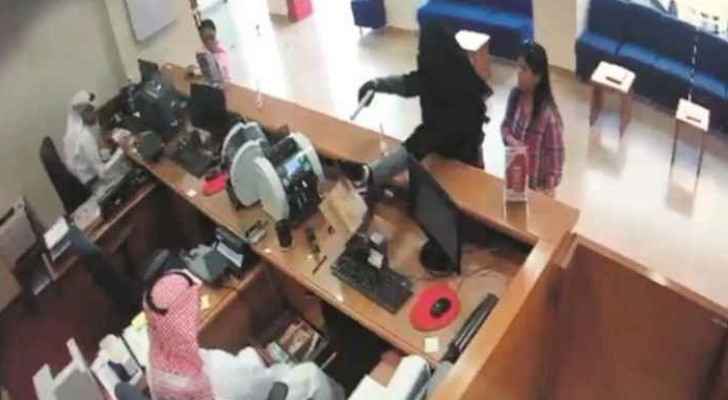 A Jordanian robbed a bank in Kuwait, armed with a toy pistol and disguised as a woman, stealing JD 4,000 on Thursday September 20, 2018.

The Gulf Bank branch in Ibn Khaldun St. in Hawalli, Kuwait did not suffer damages and employees were not harmed.

The bank stated that it had taken the necessary measures immediately, and the case was referred to the authorities.

The incident was the second in the history of the Gulf Bank, where about 20 years ago the theft of JD 320,000 from a different branch took place.

The Kuwaiti police were able to arrest the perpetrator of the armed robbery. The robber confessed to the crime.

The following are details of the confession published by Kuwaiti Al Anbaa' newspaper:

The Jordanian bank robber said that he had carried out the operation after learning that bank employees had explicit orders not to resist armed robbers, the Kuwait News Agency reported.

The Jordanian expatriate said that he had told the bank's staff with three snipers waiting outside the bank.

The robber explained that he has been preparing for the heist for about a month, staking the bank sporadically, learning that Thursday mornings were the best time to execute his plan.

He said that he had bought a black abaya and niqab from a street market, a three dinar women’s bag and a toy pistol which he had disposed of after the robbery in a trash bin outside the bank.

The robber said he was aware of the procedures the bank would follow in the event of a burglary. He was confident that he would not face any resistance as the staff had explicit instructions not to resist armed robbers and give them the money they demand. Bank staff would notify the authorities of the robbery seconds after the time of the heist, and not during.

The robber said that he did not choose to raid a jewellers or a shop because banks had orders not to resist, in addition to shop keepers ablility in recognising him or the toy gun he had as a weapon.

He said the reason he turned to crime was not being able to pay house rent, the accumulation of debts and the inability to find work.

He added that his Filipino girlfriend whom he had hidden JD 3900 in her apartment after paying the accumulated rent, had no knowledge of his plan to rob the bank. He added that she loves him and never asked of him anything that was beyond his capacity, knowing well that he was unemployed.

He said that he was planning to flee the country after the robbery, however he learnt his name was on the airport’s wanted list for debt, and so his plans fell through.

In addition, a security source confirmed that the bank staff who were at the time of the burglary have identified the robber.