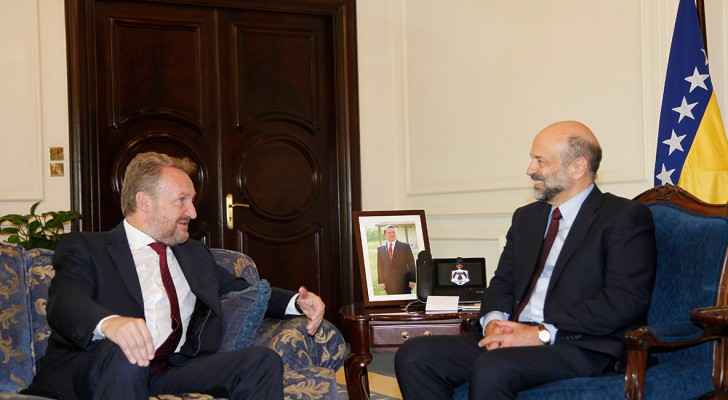 Prime Minister Omar Razzaz on Tuesday discussed with Chairman of the Presidency of Bosnia and Herzegovina, Bakir Izetbegovic, the bilateral ties between the two countries and ways of boosting the collaboration between them, the Prime Ministry reported.

Razzaz stressed the importance of strengthening the friendly relationship between the two nations and the need to promote their economy, trade and tourism sectors.

Razzaz praised Bosnia and Herzegovina's efforts to sustain peace and promote co-existence in the Balkans and the importance of working together to promote peace and stability in the Arab region.

Izetbegovic expressed his country’s willingness to promote mutual cooperation between the two countries, praising Jordan's leading role, under the leadership of His Majesty King Abdullah, and its efforts to enhance peace and stability in the Middle East.

On Tuesday evening, Izetbegovic visited the Hashemite Plaza and the Roman Amphitheater in Downtown Amman and was briefed on their archaeological and historical value.

He was also taken on a tour of Downtown and shown the most iconic bookshops there.