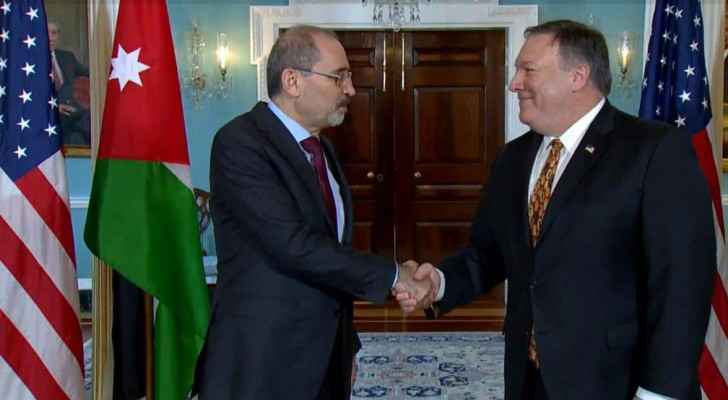 Jordanian Minister of Foreign Affairs and Expatriates, Ayman Safadi, met with United States Secretary of State, Mike Pompeo, Assistant to US President and Special Representative for International Negotiations, Jason Greenblatt, and US Special Representative for Syria Engagement, James Jeffrey, at the US Department of State in Washington on Wednesday, August 22, 2018.

After the meeting, Greenblatt tweeted "Met today with Jordanian Foreign Minister Ayman Safadi and Jordanian Ambassador to the US Dina Kawar. We discussed Jordan’s position on UNRWA and the U.S. Administration’s peace efforts."

Safadi tweeted the he “Had an in-depth and candid dialogue with US Secretary of State, Mike Pompeo, on bilateral relations and regional issues."

In the meeting, Safadi addressed the issue of the United Nations Relief and Works Agency for Refugees (UNRWA), and stressed on the serious consequences that its financial shortfall will cause.

"I warned of the serious consequences of the [UNRWA’s] financial deficit and the importance of its role, and stressed the need to break the deadlock in the peace process and intensify efforts to find a political solution for the Syrian crisis," Safadi said. Safadi also focused on the importance of reaching a two-state solution with having an independent Palestinian State with East Jerusalem as its capital. Supporting UNRWA and reaching a political solution in Syria are also what Safadi addressed during the meeting.