Civilian jumps from the Lower House gallery to meet Razzaz

Razzaz approached the distressed civilian and calmed him down, before accompanying him to an empty office 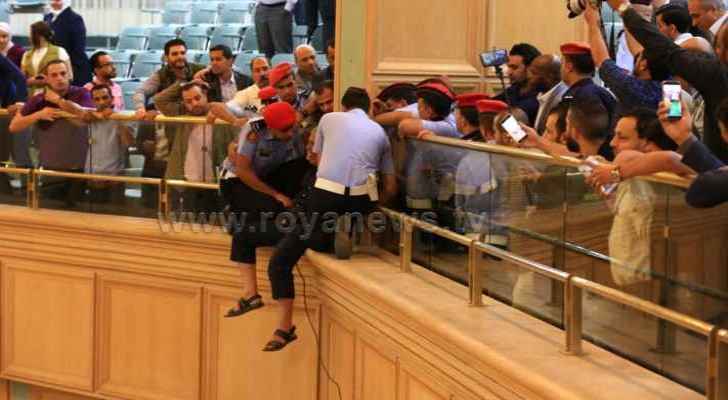 A civilian jumped from the Lower House gallery after threatening to commit suicide during Thursday’s parliamentary session, which was discussing the ministerial policy statement of PM Omar Razzaz and his government.

The man demanded that he meets with the PM, as his screams echoed across the hall.

“The man who jumped from the gallery wanted to meet the premier to discuss some issues. He started calling out the PM’s name before MPs finished casting their votes,” the Minister of State for Media Affairs, Jumana Ghunaimat, said.

Security officers held the man down in an attempt to restrain him, however, he was able to release himself and jump.

After falling to the ground, Razzaz approached the distressed civilian and calmed him down, before accompanying him to an empty office and discussing his concerns.

The man told Razzaz, who left halfway through the voting session, that he has needs that need to be fulfilled, including finding a job. Razzaz promised to look into means of helping him, before resuming the voting session.

The session ended with Razzaz winning the House of Representatives’ vote of confidence with 79 votes. Meanwhile, 42 MPs gave Razzaz a vote of no confidence, two MPs refrained from voting altogether, while six MPs were absent from the session.